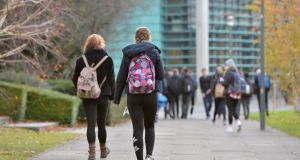 The countdown clock is ticking, and time is running out for those who haven’t yet registered with the CAO.

Monday, January 20th, at 5.15pm marks the closure of the CAO early-bird €30 online applications process. The normal closing date for applications at a cost of €45 is at 5.15pm on February 1st.

The biggest obstacle facing young people – and their parents – in choosing the right third-level courses can often be the CAO points system itself.

Today’s school-leavers are confronted with more than 1,000 courses . This dizzying array of choices is further complicated by the false perception that higher-points courses are inherently better.

It’s worth remembering how the points system operates. In essence, it is based on the Leaving Cert score of the last student to secure a place on a course. So, a smaller programme that offers 40 places will typically require higher points than one with 100 places.

Colleges within the most built-up areas – where demand for places reflects the surrounding population – tend to require higher points across the range of their courses compared to colleges in more rural areas of Ireland.

Yet, many students and parents select courses based on the highest points requirement rather than what they want to study.

Success for them is often defined as securing a place on a course which is closest to a student’s Leaving Cert points score.

If you are likely to secure 500-plus points, putting you in that elite 8 per cent, your course selection will be confined to those courses.

It is a brave student who lists a course requiring 350 points, knowing that they will achieve a score hundreds of points higher.

Sadly, many parents see third-level options totally through the prism of points requirements. Whether explicitly or subliminally, this message is clearly understood by their children, years before they begin to frame their course aspirations.

For many, going straight into college isn’t necessarily the right step. Some students are ill-prepared for the rigours of self-directed learning of third-level education. Such students can self-destruct academically within months of starting into college.

Yet, such a student would blossom in a further education college, where they could gradually acquire the self-directed learning skills needed at third level during a one-year level-five programme,

This option, however, is often not considered by most students or their parents, as attending further education is perceived as an option only for those who fail to secure high points, which is a completely false perception.

Another barrier to clarity of thought on your genuine course interests is the herd element of students within individual schools.

I often hear students tell me: “I am going to UCD or to Trinity.”

When questioned as to why this is a precondition, they invariably answer: “All my friends are going there.”

The prospect for many young people of being cast adrift in an environment where they will know nobody can often override all else.

Choosing the wrong course, however, has real consequences. It’s not a surprise that thousands of students drop out of college in their first year.

Almost one-in-10 students at university and close to one-in-five in institutes of technology fail to progress to the second year of their course.

Students – or their parents – will face a substantial bill of several thousand euro from the finance department of the college where the student starts the second time.

I have also met many adults who are seeking career changes, who realised the error of their choice in first year, but never had the courage to confront their parents with this insight.

Don’t fret just yet. There is no pressure to select the right course straight way. The CAO’s change-of-mind facility can allow you to reselect your course choices between now and July 1st. But remember if you have not already done so to register with the CAO without delay.

Difficult and all as it may be over the next six months, it is crucially important to look beyond the mirages created by the factors listed here and ask yourself one simple question: what courses are most likely to inspire your curiosity and innate interest? Once you’ve figured this out, list them in the order of your preference.