ASTI staff threaten strike action against their own leadership 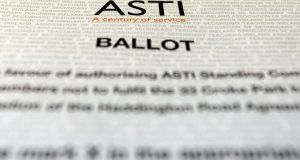 The prospect of further industrial action by second-level teachers who are members of the ASTI has receded after the union withdrew a planned ballot.

However, the union may face strike action by its own staff in a separate dispute.

The ASTI on Friday withdrew a planned ballot of members for industrial action after the Department of Education removed the prospect of any teacher being made compulsorily redundant.

However, later on Friday the trade unions Siptu and the National Union of Journalists, which represents staff employed by the ASTI, said their members working for the ASTI had voted unanimously in favour of taking industrial action, up to and including striking.

Siptu organiser Peadar Nolan said the workers had been left with little option following the “repeated refusal” of ASTI’s management to engage in the Workplace Relations Commission.

It is understood the dispute centres on concerns by staff that the union leadership failed to protect them by not adequately dealing with a range of grievances, such as criticisms made in the media and on websites by a small cohort of ASTI members.

The ASTI said on Friday it was withdrawing its ballot for industrial action after the Department of Education told the union no school would have teachers in excess of approved staffing levels for the 2017-2018 school year.

Because ASTI members rejected the Lansdowne Road pay deal, they were deemed to be outside a redeployment scheme for staff in schools that were above the official staffing threshold.

The union said the Department of Education’s confirmation that no school would have surplus staff meant no teacher would be made redundant.

“In light of this, the ASTI standing committee has decided to stand down its current ballot on industrial action in opposition to threatened redundancies,” the union said.

ASTI president Ed Byrne welcomed the development. However, he described the threat by the Government to make ASTI members redundant because of the union’s rejection of the Lansdowne Road Agreement as unnecessary.

“The threat was designed to coerce ASTI members into accepting an agreement which they had already rejected in a democratic ballot,” said Mr Byrne.