ASTI schools to lose out on hundreds of extra teaching posts 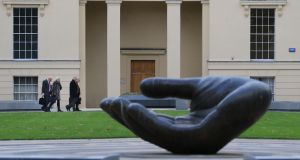 Hundreds of voluntary secondary schools where teachers are members of the ASTI are set to lose out on additional teaching posts from next autumn due to a dispute over education reforms.

Up to 550 additional full-time teaching posts are to be allocated to secondary schools from next September to allow for what the Department of Education calls “professional time” for staff in rolling out the reformed junior cycle.

The Irish Times understands that a circular to be issued by the department will confirm that these posts will only apply to schools which are implementing the junior-cycle reforms. This means the 500 or so voluntary secondary schools where the ASTI is the main union will be excluded from these additional posts. That is because the union has directed its members not to co-operate with training or assessments linked to the junior-cycle reforms.

In another development, Minister for Education Richard Bruton is reviewing a policy which is resulting in non-union members in voluntary secondary schools staffed mainly by the ASTI losing thousands of euro.

At present, teachers are not able to accept or reject collective pay agreements on an individual basis. This means that at least 1,000 non-union teachers in voluntary secondary schools are subject to the same financial penalties as ASTI members. Up until now, Mr Bruton has said there are no proposals to treat teachers separately based on the fact they are not members of a trade union.

However, in response to a parliamentary question, Mr Bruton said his Department has received queries from both ASTI members and teachers who are not members of a trade union about union membership.

“Therefore, having regard to the circumstances of the dispute with the ASTI, this is an issue that I will keep under review going forward,” he said.

The move is significant in that a policy change would give a financial incentive for members to leave the union.

Meanwhile, the allocation of extra teachers is set to go to schools run by Education and Training Boards (ETBs) and community and comprehensives.

The main union in these schools is the Teachers’ Union of Ireland (TUI), which has voted to accept the junior-cycle reforms and is taking part in training linked to the new curriculum.

As a result, pupil-teacher ratios will reduce in these schools, resulting in 18.5 students per teacher.

The ASTI is opposed to junior-cycle reforms and says it is “protecting education standards” by insisting that teachers should not assess their own students for work linked to State exams.

Separately, the Department of Education has told the ASTI that voluntary secondary schools are likely to be blocked from availing of up to 1,000 middle-management posts due to be restored across the education system this year.

These posts are being restored to the education sector following austerity-era cost-cutting. School management bodies say these middle-management posts – such as year heads or assistant principal posts – are important for planning purposes.