What is the right age to start your child in primary school? 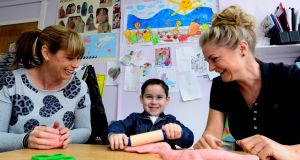 Lynn McArdle was devastated when she heard her four-year-old son Luke would not be starting school in September 2016 because the age cut-off date had been changed for enrolment.

He was doing his free year under the Early Childhood Care and Education (ECCE) scheme at Beaumont Community Pre-school in Dublin and she was expecting him to transfer to St Fiachra’s Junior National School beside it.

But then the school decided that children had to be four by the end of April to be eligible for a place and Luke’s birthday is in May.

Working in the home, and with two other children aged nearly two and nine, she and her husband Enda thought they would have to find the money to pay for Luke to continue at pre-school, as they could not contemplate “setting him back” by taking him out this year.

However they were then delighted to learn that the ECCE scheme was being extended and Luke would be entitled to another free year of pre-school.

“I was extremely relieved,” she says. And while she had thought Luke was ready for school, she is now seeing the benefits of an extra year at pre-school.

“I see a huge difference in him this year – a huge improvement in his letters, his numbers, his interpersonal skills with other children.”

She has also noticed a difference in his ability to sit still at the dinner table and to talk about what is happening in books she reads him at night.

Although children in Ireland can be enrolled at primary school from the age of four years – and must start formal education by the age of six – the age profile of junior infants has been slowing rising.

It is a trend that is expected to accelerate now that children can participate in an expanded ECCE scheme from the age of three up to five and a half.

Margaret Hennessy, co-manager of the Beaumont pre-school, says they always discuss a child’s progress with parents. Sometimes they have felt that children weren’t ready for school and have recommended that they do a second year. Generally parents would take their advice, “but in some cases, because of the financial burden on parents, there wasn’t an option to do a second year and the child would have gone to school just turned four”.

The longitudinal study, Growing Up in Ireland, found that deferring the start of school seems to be more common among more advantaged families.

While just over half of children born to low-income families in June 2008 started school in September 2012, then aged four years and four months, fewer than one in four children born the same month in families with the highest income levels did so.

This is significant because research links school readiness to future academic achievement, employment and behaviour.

There is also a persuasive argument that age four is just too young for formal schooling.

In Nordic countries such as Finland and Sweden, which rank highly for both academic achievement and child well-being, primary school starts at the age of seven. Until then the focus is on playful, creative learning in pre-schools.

Dr Carmel Brennan, director of practice with Early Childhood Ireland, believes we have to hold on to the first five years of children’s lives as a time when they can follow their own interests.

“They are in the process of finding out who they are and we don’t want to start disciplining their minds too early.” They are also “bodily active human beings”, she says. Their bodies are as important as their minds for learning, so we should not be rushing them into a classroom where they may be sitting for much of the day.

“It’s particularly difficult for boys – and so unfair to them. They get labelled as ‘problematic’ when they are just doing what nature drives them to do.”

Brennan welcomes proposals from the National Council for Curriculum and Assessment for a much greater focus on creative play during the early years of primary school and broader areas of learning in later years.

Arguing that education should be seen as “unleashing human potential” rather than children being trained in specific subjects, Brennan flips the concept of school readiness on its head by suggesting that children could engage if our schools were more ready to cater for “active, exploratory, worldly learners”.

There are children who, it seems, can’t wait to fit into the mould of the classroom and have homework, she adds, but “just because they manage it, that doesn’t necessarily mean it’s good for them and we know, without a shadow of doubt, that there are lots of children for whom it is not good and don’t manage well”.

Generally, parents are making much more informed decisions about when to start their children in school and are basing it on the individual child, according to the president of the Irish National Teachers’ Organisation, Rosena Jordan.

Although having a classroom full of slightly more mature junior infants must make a teacher’s life that bit easier, “it is all about the children, not about the teachers”, she says.

While strongly in favour of the introduction of the second free pre-school year, Jordan believes the challenge for the Government is to fund it sufficiently to ensure it is up to the quality required and “to keep the focus on education not childcare”.

Although children don’t have to start school until six, the upper age limit of five years six months for participation in free pre-school was set by the Inter-Departmental Group on Future Investment on the advice of the Department of Education, according to a department spokesman.

“Limiting the diversity in age ranges in primary school is considered to be generally in the best interest of children, in relation to peer interaction in junior infants, as well as other educational considerations,” he says.

It will be interesting to see, in the light of the extension of the ECCE scheme, if schools adjust their enrolment policies to prioritise older children.

While schools only admit new pupils in September, the ECCE scheme allows for three intakes a year – spaces permitting.

This favours children born in the months January to March, who could start their free pre-school at the age of three in April, continue until June and then be eligible for two more pre-school years from the following September.

Going into the formal education system later means, of course, that they come out of it older too.

Apart from the round of 18th birthday parties celebrating the legal drinking age now starting in fifth year and then continuing with a vengeance as a distraction in Leaving Cert year, are there any other disadvantages?

The fact that the children are 18 does have implications in the pastoral care area, in issuing of school reports and in discipline issues, says the director of the National Association of Principals and Deputy Principals, Clive Byrne.

“They have to be treated as adults and there are more responsibilities then for the schools in their codes of discipline, codes of practice and in terms of dealing with parents.”

It’s all for the good, as far as the president of the Institute of Guidance Counsellors, Betty McLaughlin is concerned.

“The more mature you are the better equipped you are to make career choices, to make subject choices, to become self aware of what your aptitudes and interests are. That in turn will lead to more fulfilling and more informed decisions about where you want to go.”

It will help children to cope better, she suggests, with the transition from primary to secondary school and could also, ultimately, reduce the drop-out rate of one in six in first year at third level.

Although the prospect of college may seem a long way off for Luke McArdle, his mother has no doubt he will benefit from the delayed start to his formal education.

As things turned out, she adds, “it was the best thing that happened that the [school] cut-off point was changed because he will be so much more ready come September”.

IS YOUR CHILD READY TO START SCHOOL? EXPERTS SHARE THEIR INSIGHTS

Age is relevant but it is not the most important factor in deciding whether or not a child is ready to start school. That’s the advice of the National Parents’ Association, Primary, whose chief executive, Áine Lynch, encourages parents to go with their gut instinct about each individual child.

“Parents know their children themselves and they know whether they feel they are socially, emotionally and at some level practically ready for school.”

If parents are in any doubt, they should contact the school, as well as listen to the advice of staff at their child’s pre-school.

In assessing school readiness among children at Beaumont Community Pre-school in Dublin, co-manager Margaret Hennessy says they look at their social and cognitive skills to see if they are competent learners.

They also judge children’s independence skills, such as if they manage their hygiene and their ability to open their own lunch bags.

Levels of concentration and attention span are important yardsticks, as is language development and their willingness to persevere with tasks.

Even at this tender age, it is maturity rather than precocity that counts.

“We have always known it, but recent research is so, so clear,” says Dr Carmel Brennan of Early Childhood Ireland. “Emotional, social development underpins all learning.”