Woulfe vs Clarke: What are the key points of disagreement? 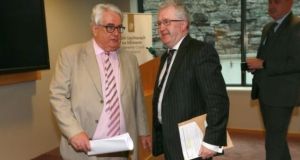 The content of Mr Justice Séamus Woulfe’s interview on September 8th by retired chief justice Susan Denham, has emerged as the key issue in the crisis that has engulfed the Supreme Court.

In explaining why he believed that Mr Justice Woulfe should resign, Chief Justice Frank Clarke, in the correspondence he released on Monday, made it clear that the major issue now was not the Golfgate dinner.

“I should say that the reasonable response of a great number of people to the transcripts has, in my judgment, caused even greater damage to the judiciary than did your attendance at the Clifden event,” the Chief Justice said in a letter to Mr Justice Woulfe on November 5th.

“It is my view, and the unanimous view of all of the members of the Court (including the ex-officio members), that the cumulative effect of all of these matters has been to cause a very significant and irreparable damage both to the Court and to the relationship within the Court which is essential to the proper functioning of a collegiate court.”

A transcript of the interview, in which Mr Justice Woulfe criticised members of the Government, and made other comments which caused controversy, was appended by Ms Justice Denham to her report, and published by the board of the Judicial Council on October 3rd, the day after it had published the actual report.

In his response to the letter from the Chief Justice of November 5th, Mr Justice Woulfe said that he would not have made some of the comments he did make, if he had known the transcript was going to be published.

“When setting out the basis upon which her review would be conducted, Ms Justice Denham confirmed to me in her letter of 28th August 2020 that the meeting would be held in private”.

“That was the basis upon which I spoke with Ms Justice Denham and I believed that our discussion would remain private, other than the possibility, of which I was aware, that in sending her report to you, she might (as she did) attach the transcripts of our meetings.”

“Insofar as any concern arose publicly about the remarks I made, such public controversy arose from the fact that you, in your role as Chairman of the Judicial Council along with your judicial colleagues on the Council, decided to publish the transcript”.

The decision to publish the transcript was made by the board of the Judicial Council, which includes Mr Justice Clarke and the heads of the other courts, including the President of the Court of Appeal, George Birmingham, and the President of the High Court, Mary Irvine, both of whom are ex-officio members of the Supreme Court.

Mr Justice Birmingham is one of the three judges who met with Mr Justice Woulfe in the Four Courts on the day the transcript was published.

In a short response to Mr Justice Woulfe on Monday, sent in the hours prior to the publication of the correspondence, the Chief Justice said the meeting with Ms Justice Denham was to allow Mr Justice Woulfe to give his account of his attendance at the Golfgate dinner, for the purposes of her preparing her report for the Supreme Court.

“The report itself included extracts from the transcripts and attached them and other documents as appendices which meant that they would be published with the report.

“Nevertheless, you were asked in advance of publication, and expressly and specifically agreed to the publication of the report and the appendices.”

Mr Justice Clarke said he could not accept that it was the publication by the Judicial Council of the report and appendices which caused any public controversy.

“Furthermore, the transcript recorded your views, even if you thought they were being expressed in private, and it is not possible to treat them as not having been expressed.”

In his letter to Mr Justice Clarke, Mr Justice Woulfe said he did not believe it would be helpful to the court for the correspondence between the two men to be published, but the Chief Justice did not agree. He said he considered publication “necessary in the public interest.”

In his letter Mr Justice Woulfe argued that particular grounds cited by the Chief Justice were not such that would justify his resignation.

“I have to consider the circumstances under which a judge should resign under pressure from a fellow judge or judges, and the implications of a resignation in such circumstances for the independence of individual Judges,” he said.

The Chief Justice, in his response, said he did not believe that his expressing his personal opinion that Mr Justice Woulfe should resign, “can properly be characterised as “judges pressurising another judge to resign” and/or somehow inconsistent with the principle of judicial independence.”

The principle of judicial independence was to ensure the independence of judges when deciding cases, he said.

He emphasised that the judges who met with Mr Justice Woulfe on October 3rd, had neither suggested he resign, nor said other judges would not sit with him.