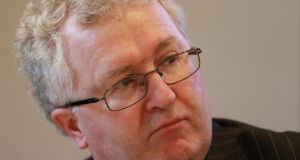 In his letter of November 5th, the Chief Justice said Mr Justice Séamus Woulfe’s approach to handling the problem overall had added very substantially to the damage caused to the Court, the judiciary generally and thus to the administration of justice. File photograph: Nick Bradshaw

The Supreme Court is facing an unprecedented crisis after the Chief Justice said Supreme Court judge Seamus Woulfe should resign over his handling of the controversy following his attendance at an Oireachtas golf society dinner.

The judge has told the Chief Justice he will not resign over the controversy, which saw 80 people attend a dinner at an event at a hotel in Clifden, Co Galway on August 19th, a day after the Government tightened Covid-19 restrictions on gatherings.

In a brief statement, the Government said: “The Attorney General has been asked to advise the Taoiseach and Government on the matter. It would be inappropriate to make any further comment at this stage.”

Mr Justice Frank Clarke told the judge at a meeting last Thursday he should resign and reiterated that view in letters last week and yesterday.

In a letter last Thursday, the Chief Justice also said the “unanimous view” of all members of the Supreme Court, including ex officio members, is that Mr Justice Woulfe has caused “significant and irreparable” damage to the court by how he has handled the matter.

Mr Justice Woulfe replied on Monday that he would not resign but would be willing to donate three months of his salary to charity, not sit as a Supreme Court judge until February 2021 and to sit as a High Court judge to help out that court.

He said he did not think any of the reasons proffered for his resignation “remotely constitute substantial reasons or grounds for my resignation, let alone amount to judicial misconduct.”

In his nine page reply, he said, despite former Chief Justice Susan Denham’s recommendation of an informal resolution process over his attendance at the August 19th dinner at an hotel in Clifden, he and the Chief Justice “have never met, formally or informally, to discuss the issues”.

The Chief Justice had “formed your personal view that I should resign without even discussing with me the shift in the goal posts when, faced with Ms Justice Denham’s unequivocal view that my attendance at the dinner did not warrant my resignation, you grounded your call for my resignation on how I had defended myself”.

In his reply on Monday, the Chief Justice said he “regrettably” remains of the view Judge Woulfe should resign.

Last week’s meeting followed the publication on October 1st of a non-statutory review by Ms Justice Susan Denham which expressed the view Mr Justice Woulfe had not broken any law or knowingly breached any public health regulations by attending the dinner.

However, Ms Justice Denham expressed the opinion he should not have attended at the dinner and was not vigilant about how it appeared for a Supreme Court judge to attend a celebratory dinner in a public place in the middle of a pandemic. She was of opinion calls for his resignation over the matter would be unjust and disproportionate and the Chief Justice should resolve the matter informally. The review was perceived as not unkind to the judge but the publication of transcripts of his interview with Ms Justice Denham compounded the controversy.

In his letter of November 5th, the Chief Justice concluded Mr Justice Woulfe’s approach to handling the problem overall “has, in my view, added very substantially to the damage caused to the Court, the judiciary generally and thus to the administration of justice”.

He referred to a phone conversation between the two on August 21st, when he expressed “my considerable concern that damage was being caused to the judiciary and that the public view was being formed by reasonable people and not by a media frenzy”. The concentration on “narrow and technical issues rather than recognising the serious public concern and the consequent damage to the Court has only added to the seriousness of the situation”, he said.

He said further serious issues arise out of aspects of the transcripts of the judge’s interview with Ms Justice Denham and elements of the correspondence between the two men since delivery of her report.

That account appeared to show the judge “did not appreciate the genuine public concern about the event and your attendance at it, but rather continued to put the controversy down to a media frenzy”.

“Indeed, your statement that you did not understand what you were apologising for at the time when you issued your limited apology would now significantly devalue any further apology. There would be legitimate public scepticism about the genuineness of any such apology”.

The Chief Justice noted the judge had commented adversely on the government’s management of the public health crisis and made remarks critical of the Taoiseach and many other office holders which “created further genuine controversy”.

“It is a longstanding and important aspect of the reciprocal respect due by the institutions of the State to each other that judges do not engage in or give rise to matters of controversy most particularly involving the other branches,” he said.

He was also critical of what he said was the judge’s implication that some of his colleagues may have prejudged him.

The “reasonable response” of a great number of people to the transcripts of the judge’s interview by Ms Justice Denham has “caused even greater damage to the judiciary than did your attendance at the Clifden event”, he said.

His view, and the unanimous view of all of the members of the Court, including the ex-officio members, that the cumulative effect of all of these matters “has been to cause a very significant and irreparable damage” to the court and to the relationship within it “essential to the proper functioning of a collegiate court.

“It is not part of my role to ask, let alone tell, you to resign. Resignation is and can only be for the judge him or herself. Regrettably, however, I believe that I should make clear my personal opinion that, to avoid continuing serious damage to the judiciary, you should resign.”

He noted the judge has said he would not resign and also noted he had offered to donate a month’s salary to charity.

The Chief Justice said his own view had been, if matters had not worsened following the Denham review, that the judge should not sit until February 2021 and should waive or repay his salary until then.

In his letter of November 9th, the Chief Justice, while welcoming some aspects of the judge’s reply, said he “regrettably” remained of the view “that you should resign” in order to maintain public confidence in the Supreme Court, the judiciary generally and the administration of justice.

He also noted the judge had reaffirmed his view “to the effect that you will not resign”.

The Government on Monday night adopted a holding position on the controversy surrounding Mr Justice Woulfe, following the publication of the correspondence between the Supreme Court judge and the Chief Justice.

In a brief statement, the Government said: “The Attorney General has been asked to advise the Taoiseach and Government on the matter. It would be inappropriate to make any further comment at this stage.”

But the leaders of the coalition parties and senior officials were understood to be engaged in intense discussions on the controversy, and the Cabinet is likely to discuss the issue when it meets on Tuesday morning.

Government ministers have shied away from making any comment on the controversy surrounding Mr Justice Woulfe in recent weeks, but the release of the letters is likely to mean the issue returns to the political agenda, with the Government facing a decision on whether it should put resolutions mandating Mr Justice Woulfe’s removal before the Dáil and Seanad.

The only way a judge can be removed from office is by a resolution in both Houses of the Oireachtas. The Government must now decide whether to put forward resolutions or to decline to act - in effect deciding to ignore the clearly expressed views of the Chief Justice that Mr Justice Woulfe should resign.

There has been a marked reluctance in Government circles to be drawn into the controversy over Mr Justice Woulfe’s attendance at the dinner. Ministers are traditionally wary of commenting on matter affecting the judiciary, citing the doctrine of the separation of powers. In this instance, Government politicians were also fearful of the widespread public anger over the Oireachtas golf dinner which prompted the resignations of Minister for Agriculture Dara Calleary and European Commissioner Phil Hogan.

Some opposition politicians, however, have not felt constrained by such concerns and have been highly critical of Mr Justice Woulfe.

Rise TD Paul Murphy has repeatedly called for him to resign. On Monday night Mr Murphy tweeted: “Seamus Woulfe hanging on to his Supreme Court position despite everything really sums up the attitude of a large section of the ruling class in this country ... they can and will do what they like with no consequences.”

The Labour Party Leader Alan Kelly said the legislative arm of the state will have to act if this impasse continues, RTÉ reported.

Sinn Féin expressed “considerable disbelief that we have arrived at a situation where the Chief Justice has had to set out a personal view that Mr Séamus Woulfe should resign his position and that he has refused to do so.”

The party’s justice spokesman Martin Kenny said the “debacle” showed the need for “the full and proper implementation of the Judicial Council Act”.

However, the party, which was criticised when senior figures attended the funeral of Republican Bobby Storey in Belfast in contravention of restrictions, stopped short of calling for Mr Justice Woulfe to resign, saying only that “this matter must be addressed.”