The life of a Supreme Court judge: ‘The law is above you’ 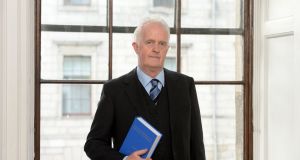 Mr Justice Peter Charleton: ‘When you go into a court and you walk up, the first thing that certainly I notice, the harp is there above my head.’ Photograph: Alan Betson

The transition to being a judge from working as a barrister can be difficult, Mr Justice Peter Charleton of the Supreme Court has said.

During an interview with The Irish Times to mark the publication of a new edition of a textbook on criminal law and evidence, he also spoke about what it is like to be appointed a judge.

The controversy involving fellow Supreme Court judge Séamus Woulfe wasn’t discussed but Mr Justice Charlton, when asked about being a judge, observed that it changes one’s professional relationship with others.

“Well, you have your friends. You don’t lose your friends [when you become a judge]. Some of your friends will be lawyers, and you see them, but you don’t stop on the corridor [of the Four Courts] and talk to them.”

Judges cannot give the impression that they are friendly with a litigant, or someone who might be appearing and doing a case before them, he said.

“And then there are others who like the whole notion of being part of a group, and I am not sure that would be so much me, so no, it wasn’t difficult [for me].”

Appointed to the High Court in 2006, Mr Justice Charleton has been a member of the Supreme Court since 2014.

“The whole notion of being a judge, one thing that always struck me, you know, what was it like during the grim times in 2008 onwards, when house prices in this country were a third or less than people had paid for them two years earlier, where people were crushed by debt, where you had to make decrees enforcing a debt? What’s it like when somebody gets found guilty, and you have the job of sentencing that person?

One of the developments that assists judges these days is that of sentencing bands, or ranges within which judges are expected to locate a crime before the court, for the purposes of deciding on a sentence.

“There has been a lot of public controversy about sentencing guidelines, sentencing bands, and what doesn’t seem to be noticed is that we have them. Starting with a case in 2007 called WD, which was a rape case that happened to be a decision of mine.”

In that Central Criminal Court case, he explained, he and his then judicial assistant got all the written rape decisions that were available and put them into piles on a table, with one pile for cases that had resulted in lenient sentences, another pile for ordinary sentences, and another for severe, and so on.

Working in this way, he devised a series of categories of seriousness (“rape is always serious”) of rape cases, and outlined the bands within which the sentences given previously in each category of rape had fallen.

A judge now locates a case as lying within a band, and then applies the circumstances of the particular case before the court when arriving at a final sentencing decision.

This method of working has been approved by higher courts, and similar exercises have been conducted for other types of crimes, such as manslaughter, child defilement, aggravated burglary etc. Manuals setting out these sentencing bands are available to judges and to legal practitioners.

Although the method is rooted in the sentences handed down in previous cases, that does not mean that sentencing practice does not change over time.

For instance, “it is possible to get a suspended sentence for rape, but it hasn’t happened in the past 10 years” save in one case that doesn’t really qualify, Mr Justice Charleton said.

The judge was being interviewed to mark the publication of Charleton and McDermott’s Criminal Law and Evidence, a fully rewritten new version of a highly regarded work he was a co-author of in 1999.

The new work’s second lead author, who also worked on the first edition, was the practitioner and commentator Paul Anthony McDermott SC, who died in Christmas 2019. The other authors of the book are Ciara Herlihy and Stephen Byrne BL. The book is “about three quarters of a million words” in length.

The Supreme Court judge feels that this jurisdiction should do more to set out in law (codify) identical definitions of key concepts such as intention, recklessness and possession, to be applied across different pieces of legislation.

For instance, in relation to sexual offences, “there has been lots of reform in that, and I can’t say that any of it is other than sensible, but the problem now is that you have got lots and lots of acts.”

If all this legislation was consolidated in one act, as has been done with the Criminal Justice (Theft and Fraud Offences) Act, 2001, then the same definitions of key concepts could apply to all the varying offences of this category of crime, rather than having the current situation where there are variations between acts. “Why can’t we pull them together and codify things?”

It would be a massive task to try to do this across the whole of criminal law, but it could be done progressively by area of law. “By the inch, it’s a cinch,” as he notes in his foreword.

Charleton and McDermott’s Criminal Law and Evidence is published by Bloomsbury Professional.