Supreme Court has backed itself ‘into a corner’ over Woulfe, says former judge 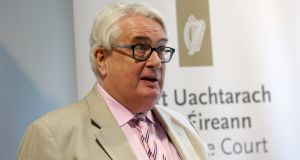 The stand-off between the Chief Justice and Supreme Court judge Séamus Woulfe raises “serious constitutional issues”, the Government has said.

In a statement just before lunchtime, the Government said it would consider the correspondence between Mr Justice Frank Clarke and Mr Justice Woulfe which was published on Monday night.

“The Attorney General outlined the serious constitutional issues that now arise and the respective responsibilities of each of the organs of the State as set out in the Constitution, including in particular the respective roles of the Judiciary and of the Oireachtas.

“The members of the Government, who are also members of the Oireachtas, are acutely aware of the sensitivity and seriousness of the issues and the need to ensure that the constitutional framework is fully respected by all concerned. This includes avoiding inappropriate public comment.

“The Government agreed that it will continue to reflect on these issues.”

The Supreme Court is facing an unprecedented crisis after the Chief Justice said Mr Justice Woulfe should resign over his handling of the controversy following his attendance at an Oireachtas golf society dinner.

Mr Justice Woulfe has told Mr Justice Frank Clarke he will not resign over the controversy, which saw 80 people attend a dinner at an event at a hotel in Clifden, Co Galway on August 19th, a day after the Government tightened Covid-19 restrictions on gatherings.

Mr Justice Clarke told the judge at a meeting last Thursday he should resign and reiterated that view in letters last week and on Monday.

The Government statement comes after opposition parties urged caution from Oireachtas members in their public remarks on the matter.

Aodhán Ó Ríordáin, the Labour Party education spokesman, said it was “important for all Oireachtas members just to take a step back and realize the seriousness of this and that any public utterances are going to be important in this regard”.

He said the independence of the judiciary was paramount, and that any member “making comments about this issue has to be clear in his or her minds about the importance of that independence, which is crucial for the future of our democracy”.

Martin Kenny, the Sinn Féin Justice Spokesman, said the argument that Mr Justice Woulfe’s position may now be untenable reflected the views of the judiciary.

The Sinn Féin TD said the situation was “fraught with difficulty,” but added that the party was “saying his position is clearly untenable when he has lost the confidence of his colleagues in the judiciary and the Chief Justice; that’s clearly what they’ve said”. Mr Kenny said it was either up to Mr Justice Woulfe or to the Oireachtas to come up with a solution to the problem.

“I think it would be a very difficult one to see it succeeding, given that there wasn’t a law broken. And, and I think there’ll be a caution about commencing something that is weak to begin with,” she told journalists on Tuesday morning.

“That doesn’t mean that there isn’t a very significant issue of judgment. And the very fact that, he’s not capable, or it’s not going to be tenable to work with his colleagues, is a very difficult situation,” she said, adding that resignation was a matter for Mr Justice Woulfe alone and she was not calling for him to resign.

“I just think his position, if he looks at it, he should ask himself: Is it tenable? If you can’t work with your colleagues and your colleagues can’t work with you in the in the Supreme Court that is a very difficult scenario, and there’s no simple solution to it. We don’t have the experience of an impeachment process, and is the criteria sufficient to actually meet that bar?” she asked.

Former district court judge Michael Pattwell has said that Supreme Court judge Séamus Woulfe “should get a good PR person to help him” and that if he was in that situation he would “let it play out” and not resign.

The Chief Justice and the Supreme Court have “backed themselves into a corner” he told RTÉ Radio’s Today with Claire Byrne show.

There was no law to back the stance taken by the other members of the Supreme Court, he said.

The former judge questioned how could they sit with Mr Justice Woulfe in the future. He added he could not see any efforts at impeachment succeeding, “political or otherwise”.

While he criticised the manner in which both former European Commissioner Phil Hogan and Mr Justice Woulfe dealt with the aftermath of the Oireachtas golf dinner in Clifden, what had happened was “not serious enough” to warrant the resignation of the judge, Mr Pattwell said.

The Chief Justice Mr Justice Frank Clarke should not have “invented a sanction” that did not exist in law and he would have been better “keeping it to himself. There was nothing to back up what Mr Justice Clarke said; it was just an opinion, Mr Pattwell added.

“If I was Séamus Woulfe I would stay and let it play out.”

As Chief Justice, Mr Justice Clarke acts as president of the Supreme Court and the State’s highest judicial officer.

All of what had transpired had come about because “Dara Calleary jumped too soon” when he resigned as minister for agriculture”, Mr Pattwell said. “He set the tone then.”

While he had “never been a fan” of Mr Hogan, Mr Pattwell said that he had seemed to be doing a good job in Europe.

On the same programme, former minister Shane Ross also said that the Supreme Court had backed itself into a corner on the issue. Retired chief justice Susan Denham had been asked to conduct an investigation, but her recommendation had been ignored by Mr Justice Clarke.

Politicians don’t want to touch the issue, said Mr Ross who championed reform of the judicial appointments system when serving in the last government.

Former Labour party leader and the party’s current justice spokesman Brendan Howlin said politicians “cannot do nothing” about the controversy.

Since there were no judicial mechanisms left to resolve the issue, it would now fall to the Oireachtas, he said.

This must be done in a very public, clear, transparent and unbiased way, he said. This was a situation where every member of the Oireachtas would have to make an independent decision and it would not be a matter for party whips or party positions, Mr Howlin added.

He said that anyone who had been involved in pre-determining the issue by making a call one way or another should recuse themselves from making any decision on the matter.

No member of the Oireachtas wanted to be involved in the process because they were very mindful of the separation of powers. “It is not a process that any politician wants to be involved in.”

Under the Constitution a judge could be removed, but it had to be a fair procedure, he stressed.