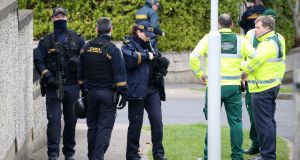 Armed gardaí and paramedics during a standoff at a house on Ballyogan Green in Dublin on Thursday afternoon. Photograph: Colin Keegan/Collins

A replica firearm has been recovered by gardaí following a hostage situation in Dublin earlier today.

Gardaí from Cabinteely responded to reports of a disturbance at a house at Ballyogan Green, Dublin 18 at about 11.20am on Thursday.

A number of Garda units attended the scene while a Defence Forces bomb disposal team was requested as a precaution.

The woman left the house unharmed after a short period.

Negotiators remained in contact with the man, who left the house at about 3.30pm and was taken to hospital.

A replica firearm was recovered in the house afterwards. Gardaí said their investigations are ongoing.