Defamation legislation must be extended to new digital players 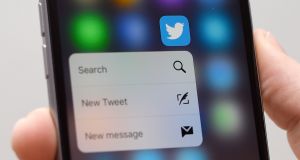 Facebook and other companies obdurately resisted any suggestion they were anything other than neutral providers of a technical service. Now they exhibit a grudging acknowledgment they are in effect media companies. Photograph: Lauren Hurley/PA Wire

When Minister for Justice Frances Fitzgerald and her colleagues consider the submissions made to her review of the 2009 Defamation Act, they surely cannot fail to be struck by how dramatically and quickly the media landscape has transformed in the last eight years.

The requirement that the review should “consider any relevant developments since 2009” is therefore both pressing and essential.

In truth, even in 2009, the Act lagged behind the reality of the digital disruption which was already affecting media. This is reflected in its ambiguous wording over whether online news sites and other forms of new media might be able to avail of the benefits offered by voluntary self-regulation. Even then, the existential threat posed to traditional modes of journalism was making itself felt.

Now, when deciding what changes should be made to the Act, the Minister must take account of an environment where the distinction between newspapers and broadcasters has blurred, where traditional distribution channels have been replaced by instantaneous social sharing and algorithmic personalisation, and where every individual can become a content creator if they so wish. In addition, the onerous burden imposed on Irish news media by excessive defamation costs is more keenly felt than ever, as traditional business models falter and budgets come under increasing strain.

Fake news and filter bubbles may have become cliched phrases, but they still describe real phenomena which threaten to erode long-held concepts of the value of a free press to society.

When announcing the review, Fitzgerald said she wanted to ensure “that our journalists, commentators and news media can exercise their vital role in a democratic society, to report, investigate and challenge, independently and vigorously, in the public interest”. She also stressed it was important to ensure the law “offers effective protection against damaging comments which are defamatory and can cause such distress, spread so quickly and stick so fast, particularly online or in social media”.

How should those twin objectives be met in an environment where audiences are now active agents, sharing, commenting on and reacting to content, some of it published by traditional media companies, some by new, digital-only outlets and some by individuals?

A study by the Reuters Institute for the Study of Journalism in 2016 found that, in Ireland, half of those surveyed used social media as a source of news each week, with Facebook the most popular network by far. What these online users see is determined by sophisticated algorithms deliberately designed to maximise Facebook’s profits, as well as preventing the posting of certain images or language. Social platforms’ claims that such filters are editorially neutral look increasingly threadbare.

Meanwhile, attempts by news publishers to engage in the democratised debate which digital technology makes possible by facilitating user-generated comment on their websites have been frustrated by contradictory and confusing responses from legislators and courts to key questions of responsibility. In essence, traditional publishers carry the legal burden of defamation into the new world of interactive self-publishing, while Facebook and other sites operate under no such constraints.

In 2015, the European Court of Human Rights, in what has become known as the Delfi case, made a distinction between the level of “duty of care” expected of news sites and what is expected of social media sites on the basis that the former and not the latter allegedly have a financial interest in such content. That distinction will have caused hollow laughter from media companies across Europe who have watched their advertising revenues leach away to Facebook in recent years.

The Irish Times, in its submission to the review, argues the legal landscape in relation to hosting user comments is fraught and a “high risk” for traditional publishers, placing them at a disadvantage in relation to social platforms.

“Any legal regime which sought to treat newspaper sites and social media sites’ ‘duty of care’ obligations differently would be to create inequitable double standards – both ethically and commercially,” it argues. “We do not accept . . . that there is a qualitative difference between newspaper sites and the news pages of Facebook – to privilege the latter legally over liability for defamation would be an injustice and provide social media sites with an unfair commercial advantage.”

The Defamation Act currently provides that “The owner of any periodical in circulation in the State or part of the State shall be entitled to be a member of the Press Council. ”

A “periodical” is further defined as “any newspaper, magazine, journal or other publication that is printed, published or issued, or that circulates, in the State at regular or substantially regular intervals and includes any version thereof published on the internet or by other electronic means.”

That wording clearly requires updating to reflect modern realities. But if the Minister wishes to make the legislation truly fit for purpose for the next 10 years or more, she should consider extending the protections of a revised and reformed defamation regime to any media organisation – including social networks – willing to avail of it.

A few years ago, this might have seemed an implausible proposition. Facebook and other companies obdurately resisted any suggestion they were anything other than neutral providers of a technical service. Now, though, the mood music has changed, with a grudging acknowledgment in the face of political and legal pressures that they are in effect media companies.

Such a move would also be consistent with last week’s announcement by Minister for Communications Denis Naughten that he is setting up a new office of digital safety commissioner, as recommended by the Law Reform Commission. The new commissioner will set out nationally agreed standards on an efficient take-down procedure for abusive or offensive online material. These procedures will not, however, apply to defamation. It is all the more essential, therefore, that Ms Fitzgerald should establish robust standards in this regard, by extending the scope of the Defamation Act to include user-generated content and social networks.

Tomorrow: Colm Keena on money awarded in libel actions in this jurisdiction compared with European counterparts