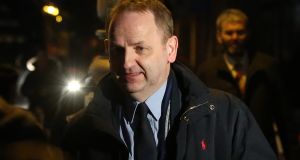 Garda whistleblower Maurice McCabe. There is nothing in law to prevent the tribunal being live-streamed. Photograph: Niall Carson/PA Wire

A tribunal of inquiry was the only option for the Government in order to lay to rest the extraordinary position the State finds itself in.

There is widespread suspicion that people at the very top of our police force, who swore to uphold the law and protect us from criminality, conspired to destroy the character of a citizen, and cause enormous distress and damage to his family while doing so.

Whereas Superintendent David Taylor, formerly of the Garda Press Office, says he was instructed by former Garda commissioner Martin Callinan, and then deputy commissioner, now Commissioner, Noirín O’Sullivan, to conduct a smear campaign against Sgt Maurice McCabe, the commissioner has said, and repeated, that this is not so.

She says that not only did she not take part in any such campaign, she did not even know about it. Callinan has not made any public comment.

The parties affected can now be brought into a public forum and asked to give sworn evidence. The person appointed to chair the tribunal can then make a finding, but the public can also come to their own conclusions.

The tribunal’s staff can forensically examine whatever evidence exists, whether it be on paper or held electronically, and can also seek information from third parties, who can also be called in to give sworn evidence.

This information can guide the tribunal’s barristers as they decide on what questions to put to the key witnesses. It can also guide the barristers representing the senior Garda figures, and McCabe.

There is nothing in law to prevent the tribunal being live-streamed, or broadcast on TV, though it has been the practice to date not to do so. Given that the purpose of a tribunal is to allay public concerns, the decision not to broadcast proceedings is difficult to justify.

The Moriarty tribunal put TV cameras in overflow rooms in Dublin Castle when the former taoiseach, the late Charles Haughey, was giving evidence, but did not allow the images to be broadcast. The matter of broadcasting proceedings is one for the tribunal’s chair.

Given that credibility is such a key issue, a tribunal of inquiry is more suited to the situation of the McCabe controversy than a (much cheaper) commission of investigation. The latter type of inquiry was provided for in part as a reaction to public concern over the cost, and duration, of tribunals.

In order to lessen costs, commissions are designed to avoid triggering what are called the re Haughey rights (rights stipulated by the Supreme Court in a 1971 case involving Haughey’s brother, the late Jock Haughey).

These rights provide that a person whose good name is at issue should be allowed legal representation and the right to cross-examine witnesses and rebut evidence.

In order to avoid the legal costs that such rights bring with them, commissions of inquiry are held in private and transcripts of their proceedings are not published. Cross-examinations only occur if the commission allows it.

Indeed one of the issues that will have to be canvassed, publicly, by the tribunal of inquiry, will be the instructions given by O’Sullivan to her counsel when matters relevant to McCabe were being investigated by the O’Higgins Commission.

The private inquiries that have been held to date arising from garda whistleblower disclosures have only served to add to the public’s sense of confusion and unease.

A tribunal of inquiry should be able to investigate the allegations made to Tusla, the child and family agency, while protecting the identities of those the tribunal deems are entitled to such protection.

The terms of reference will be key to deciding the tribunal’s duration. The McCracken (Dunnes payments) tribunal was established in February 1997 and reported that August. It is considered to have been a great success and led to a short and succinct report. Credit for that goes to the chairman, Mr Justice Brian McCracken, but also the focused terms of reference it was given.

While the topics the McCabe inquiry will have to look into may be a bit wider, the number of key actors is relatively small, or at least that is how it appears at this stage.

Tribunals of inquiry, by their nature, throw up the unexpected, and can lead to others than the expected witnesses and lines of inquiry being dragged into their maws. Indeed, they can sometimes lead to successor tribunals established to allay public concerns about new matters of controversy uncovered by the original tribunal.

Everyone involved will now lawyer up, and practitioners with experience of tribunals say that lawyers matter. A strong, well-resourced team strengthens your position.

Arguably this will put McCabe at a disadvantage. Tribunals usually do not pay legal costs until after they report. A private individual has to get a legal team that is able and willing to devote themselves to a job, payment for which will be at some, impossible to pinpoint, time in the future.

Most likely O’Sullivan will have a team that is being paid, on an ongoing basis, by the State. That may not be so for McCabe, nor, indeed, Callinan.

Mr Justice Peter Charleton, of the Supreme Court, was to have headed the proposed commission of inquiry. Legal sources were of the opinion he would be a good tribunal chairman. He was an experienced criminal barrister before becoming a judge, and is familiar with the ways and culture of the Garda. He is considered to be judge that would be focused on and able to produce a well-written report.

Since the establishment of the Court of Appeal in 2014, the Supreme Court has not been as snowed under with work as it used to be.