Man who violated woman with handle of claw hammer is jailed 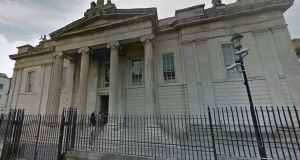 Aaron Hyland (22) was jailed for eleven years at the Crown Court in Derry for violence the judge described as sickening.

A woman was left with life-changing internal injuries to her vagina and rectum after a man used the handle of a claw hammer to violate her.

Aaron Hyland (22) of Katherine’s Road, Ballymurphy, Belfast, was jailed for eleven years on Wednesday at the Crown Court in Derry.

The victim(25), now wears a colostomy bag and may never be able to conceive as a result of the assault in her Derry home on October 3rd, 2014.

“The defendant showed her absolutely no mercy in his use of this weapon. The violence used was quite sickening and it is difficult to imagine how the defendant behaved as he did,” he said.

Judge Babington said the attack on the victim occurred after she and Hyland returned to her home after they had both taken diazepam tablets and consumed large amounts of alcohol. He said both were initially flirting with each other.

At 10.24pm an ambulance was called by Hyland. They found her naked on her bed and bleeding heavily. A blood-stained claw hammer was recovered and there was a great deal of blood in the bedroom and in the bathroom to where Hyland had dragged his critically ill victim.

She was taken to Altnagelvin Hospital and such was the nature of her internal injuries that initially surgeons thought she would not survive. She had numerous perforations and ruptures to the interior of her vagina and rectum and part of her bowel had to be removed during surgery.

Hyland was arrested at the scene and he told the police that he and his victim had engaged in consensual sexual activity. He denied using the claw hammer to inflict injuries on his unconscious victim. On the morning of his trial on November 7th of last year he pleaded guilty to causing her grievous bodily harm with intent. A charge of rape was allowed to remain on the books not to be proceeded with without the permission of the court .

Judge Babington said very considerable force was used by Hyland to cause the injuries to his victim who because of her unconscious condition could not give her consent. He said the surgeons have stated that a full recovery is not anticipated.

Judge Babington said he noted from a pre-sentence report that Hyland, who had 67 previous criminal convictions, thought about his actions every day and was remorseful for inflicting the injuries on his victim.

However Judge Babington said he was sceptical about Hyland’s remorse but accepted that had Hyland not called the ambulance she would probably have died .

He said Hyland carried out quite terrible assaults on his victim’s most intimate areas.“This is a case of a most serious nature where the defendant has caused very serious injuries to a young woman who is now aged 25 . She has been left with life changing injuries. Investigations are still being made in this regard but as the prosecution counsel says the outlook is somewhat pessimistic”.