No precedent for foreign investigation into McCabe allegations

Giving Garda-style powers to outside investigators could be deemed unconstitutional 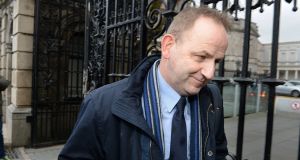 Suggestions that investigators from outside the State should be brought in to independently investigate Sgt Maurice McCabe’s allegations seem unworkable, senior legal sources have said. One told The Irish Times the idea was without precedent and would not work.

“You can hire anyone you want from abroad, but when you bring them in they would not be Garda members and they’d have none of the powers of the Garda,” said one source. “They’d be like private detectives. They wouldn’t have the power of arrest, they couldn’t compel suspects or witnesses to give interviews and you couldn’t hold that for use as evidence against them like the Garda can.”

Another source believed there was no precedent whatever for outside investigators to be brought into the State to carry out a criminal inquiry.

“You had the Canadian judge [Peter Cory] who examined the shooting of RUC officers after they left a meeting at Dundalk Garda station, and he then recommended the Smithwick Tribunal,” he said. “But Cory didn’t do a criminal investigation. He reviewed the evidence and suggested the investigative mechanism that was indeed set up. But in this case the Charleton process is already in place.”

The Smithwick Tribunal was set up in 2005 to inquire into the killing by the IRA in 1989 of two senior RUC officers, Chief Supt Harry Breen and Supt Robert Buchanan, after they had left a meeting in Dundalk Garda station. It concluded there was collusion between unnamed Garda members and the IRA, but could go no further.

Retired Canadian High Court judge Peter Cory began his report in 2002 and, in the following year, recommended the establishment of a further process – which became the Smithwick Tribunal – into allegations of collusion.

The tribunal was established in 2005 and did not conclude until the end of 2013. Any such timeline for the McCabe allegations would mean everyone involved would be retired before the process ended.

Perhaps understandably, Sgt McCabe prefers a criminal investigation by people from outside the State, though how it would be done remains unclear.

A number of lawyers said any effort to confer Garda-style powers on foreign investigators for a specific period of time to investigate the Sgt McCabe case would be deemed unconstitutional by the courts.

“Where would the checks and the balances be, the oversight or the recourse for people who believed they weren’t treated fairly?” said one.

Another noted: “All they would be able to do is to go around and interview people who agreed to be interviewed, and prepare a file, and perhaps conclude that offence A or B had been committed, in their view.

“But they would be recommending to the Garda to follow up their work and investigate the offence. So you would still end up with the Garda for the actual criminal investigation and prosecution.”

Another lawyer suggested that “it might in theory” be possible for the Garda Síochána Ombudsman Commission (Gsoc) to conducted a major inquiry into all aspects of Sgt McCabe’s complaints and to hire new investigators from abroad to carry out that inquiry.

“You would be looking at a team that could be said to be new and independent, but who would be working with the current structures and legislation and who would also have Garda-style powers,” said the source.