Man in his 70s in critical condition after four-car crash 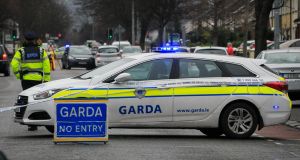 A man in his 70s is in a critical condition following a four-car road traffic collision in Dublin.

The crash occurred at 1.10pm on Thursday on St Peter’s Road, Walkinstown.

The man was the sole occupant of one of the vehicles.

He had been pronounced dead at the scene and was removed to Tallaght Hospital. However, he is now said to be in a critical condition at the hospital.

The occupants of the three other vehicles are said to be unharmed following the incident.

Gardaí are appealing for anyone with any information on the incident to contact them at Crumlin Garda station on 01-6666200, the Garda Confidential Line on 1800-666111 or any Garda station.