Woman to challenge prosecution for getting abortion pills for her daughter 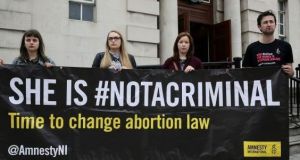 Campaigners demonstrate in support of the woman during a hearing in the case in September. Photograph: Brian Lawless/PA Wire

A woman who is facing a trial after obtaining abortion pills for her pregnant teenage daughter is due to challenge the prosecution in a potential legal landmark for Northern Ireland’s criminalisation of abortion.

The woman will appear in a Belfast court on Tuesday to seek to overturn a decision by the Public Prosecution Service for Northern Ireland to subject her to a criminal trial and the prospect of five years in prison for supplying the pills in 2013 to her then 15-year-old daughter, who terminated the pregnancy.

The woman, who has not been named, is accused of two charges of unlawfully procuring and supplying abortion pills contrary to the 1861 Offences Against the Person Act.

The judicial review is the first time prosecutors have faced a direct challenge over a decision relating to the criminalisation of abortion in Northern Ireland.

A hearing on the case in September was adjourned to allow prosecutors to make a formal submission to the High Court in Belfast on the human rights implications of the case in the wake of a UK supreme court ruling.

“This case is the first-ever direct challenge to a prosecution under Northern Ireland’s restrictive abortion law,” Grainne Teggart, Amnesty International’s Northern Ireland campaign manager, said in a statement. Amnesty is supporting the woman and her legal team.

“All this mother has done is help her daughter access abortion pills that are prescribed free on the NHS in every other part of the UK,” said Ms Teggart.

“This is an obvious and cruel injustice. This woman has done nothing wrong and yet our laws treat her as a criminal. It’s unacceptable that she has had to suffer and endure five distressing years of legal battles and a fight against a prison sentence.”

In a statement released in September, the woman said she had endured “five years of agony” with the prosecution hanging over her and her family. “The fear and pain of it all. I feel like I am not allowed to move on. The only place I feel safe and I can speak is in work, because it’s anonymous and I have a distraction.” She said she had lost all trust in doctors and no longer used their services because it was her GP who alerted police to the case.

MPs in Westminster last month voted by 207 to 117 in favour of an amendment forcing Northern Ireland secretary Karen Bradley “to issue guidance” to explain how officials can continue to enforce the region’s Victorian-era abortion law. The vote was largely symbolic as it is unclear how much impact the amendment would have on existing practice.

The NHS does not provide abortions in Northern Ireland, forcing women who live there to travel to Britain to obtain terminations. – Guardian