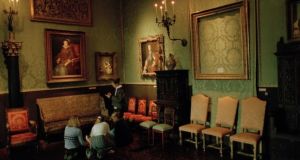 An empty frame at Isabella Stewart Gardner Museum, in Boston, US, which used to house a Rembrandt stolen in 1990. Photograph: Brooks Kraft/Corbis via Getty Images

The proceeds of the largest art heist in history may be in Ireland, after being given to the IRA by murdered Boston gangster Whitey Bulger, a prominent art theft investigator has said.

Just after St Patrick’s Day in 1990, a gang robbed 12 works of art, including a Vermeer worth an estimated $200 million (about €176 million), from the Isabella Stewart Gardner Museum in Boston.

The artworks are thought to be worth a total of about $500 million, making the incident not only the largest-ever art heist but also the largest theft of private property in the history of the US.

None of the works have been seen in public since.

Art theft investigator Charles Hill has now said he believes Irish-American gang leader Bulger gave the proceeds of the heist to the IRA because he felt he owned it after a consignment of guns was seized off the Irish coast.

Mr Hill was a detective with London’s Scotland Yard specialising in art theft. In 1996 he led an undercover operation to recover Edvard Munch’s The Scream, which had been stolen two years earlier in Norway.

He was also involved in the recovery of two high-value paintings taken in Co Wicklow in 1986 during the infamous Russborough House heist. The Irl£30 million robbery was led by notorious gangland figure Martin Cahill, who later enlisted the help of loyalist paramilitaries to fence the paintings.

According to Mr Hill, the Russborough House heist served as the inspiration for the Boston robbery four years later.

Mr Hill, who now works as a private detective, made the claims while speaking to the Observer newspaper following the murder of Bulger in a US federal prison last week. Bulger was reportedly killed by members of the Italian mob. He was serving two life sentences for 11 murders.

There is “no hard evidence” for the IRA connection, Mr Hill told the newspaper, “but I combat art crime both rationally and irrationally, intellectually and viscerally”.

“That technique serves me well as a style and measure of success,” he said.

“On the new morning of March 18th, 1990, even the dogs in the streets of south Boston must have known that Whitey was involved in some way before, during, or after the robbery,” he said. “Whitey was an IRA sympathiser, he loved to associate himself with ‘the cause’, and was involved in arms deals and drugs shipments to the Republic.”

Mr Hill said he believes Bulger offered the works to the IRA because he felt he owed his Irish associates.

“After a shipment of weapons and ammunition was intercepted by the Irish Navy off the coast of Co Kerry in 1984, Whitey felt he owed one to his friends in the Republic. I believe he offered them the paintings.”

The works were transferred to the IRA through an affiliated gang, he said.

Mr Hill is basing his theory on leads from underworld contacts. He said he believes the paintings are still stashed somewhere in the Republic.

“Even if Bulger did not order the robbery originally, he would have muscled in and taken control of the haul soon after it took place.”

Bulger led Boston’s Winter Hill Gang from the early 1970s. As well as being one of the US’s most notorious gangsters, he also served as an informer for the FBI, feeding the bureau information about rival criminals.

He served as the inspiration for Jack Nicholson’s gang leader character in The Departed and was played by Johnny Depp in Black Mass.