A doctor must act like one - even around conscience and abortion 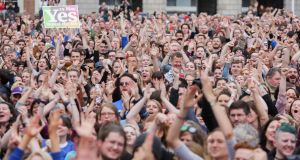 Hard as many worked to accomplish May’s historic vote, repeal was the easy part. Implementation of the new abortion service will require navigating some complex issues. Photograph: Gareth Chaney Collins

Although most Irish doctors supported repeal and the mandate from voters, how Ireland sets the practical rules for doctors like X, Y and Z will determine whether Irish women get the services promised.

Hard as many people worked to accomplish last May’s historic vote, repeal was the comparatively easy part. The complicated tasks lie ahead as implementation of the new abortion service will require navigating some complex issues. Fortunately, Ireland can learn from the experiences of other European countries whose national health services have included abortion for years.

These nations have already tackled this and concur with international human rights bodies that freedom of belief must be protected but that it cannot be expressed in a way that compromises the rights of others. In other words, my rights end at the tip of your nose. Medical societies, including the Irish Medical Council , have laid this out in concrete terms. They state that the physician’s primary duty is to treat the patient, the right to conscientiously object is secondary to that, and that safeguards must be in place to ensure that even patients of objectors have access to services without experiencing discrimination or undue delay.

Specifically, objecting doctors must provide patients with scientifically accurate information, must make referrals to willing and available alternative doctors, and must provide the contested service if no one else can do it or if the patient is in an emergency. Moreover, only individuals involved in direct provision, not those involved with follow-up care, making the appointment, ordering supplies etc, can conscientiously object.

These standards help to ensure that objectors do not move beyond their own conduct and try to govern the behaviour of women who do not share their religious or moral beliefs. In the opening stories, Dr X is a genuine objector whereas Dr Y is obstructing women from obtaining care. Dr Z is not an objector at all as he is not worried about deep-seated conviction but, rather, to avoid a work payment situation he finds unfair.

Although two-thirds of voters supported repeal, there must be clear and fair guidelines to handle those who are unhappy with the decision, especially if they must play a role in providing the service. Some clinicians want to refuse, calling themselves conscientious objectors. Previously, the term conscientious objection has been invoked by those refusing to fight in wars, or in my home country of the US, by those protesting racially discriminatory laws or the denial of asylum to political refugees. More recently the term has been used by those opposed to social and political changes, many of which have to do with sex and reproduction. This group includes those who want to refuse to provide certain contraceptives, abortion or sterilisation, or wedding cakes for same-sex couples.

The earlier group of objectors accepted the consequences of their refusal of legal duties: they drove ambulances or did kitchen duty or went to jail. Today’s group wants exemption from consequences for refusing legal or professional duties.

The issue is further complicated in healthcare because doctors and other clinicians have an additional specific professional duty to put patients’ needs first, above their own. This duty arises in exchange for the privileges doctors derive from being licensed to provide an essential service, and because patients are vulnerable and must be able to trust that physicians will put their needs first and respect their decisions.

Conscientious objection to legally sanctioned healthcare raises the question of how to draw the line between support for individual belief and support for those with other beliefs who are entitled to democratically agreed-on services. The objecting physician has a right to freedom of belief, as does the patient seeking an abortion, and she also has a right to obtain legal services

Several European countries illustrate approaches to supporting individuals’ beliefs without harming those with different beliefs. The national healthcare systems in Portugal, Norway and England are obliged to assure that women have access to free and timely abortion care. Objection is permissible as long as it does not interfere with the state’s obligation to offer abortion services. These national health systems meet their obligations by insisting on the safeguards listed and will not hire additional objectors if a given region or hospital has too few willing providers onboard already.