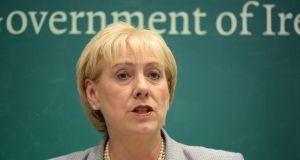 An account of the collapse of the trial is being reviewed by the Cabinet and is likely to be published later today by the Minister for Business Enterprise and Innovation, Heather Humphreys. Photograph: Dara Mac Donaill / The Irish Times

The Government is to strengthen the agency that oversees company law and investigates white collar crime, in part in response to the collapse of the trial of the former Anglo Irish Bank chairman, Sean FitzPatrick.

Measures to be considered by the Cabinet today include the granting of new investigative tools, including new search and entry powers to gather evidence that is held electronically, to a new renamed white collar crime agency.

Such a move would improve the organisation’s the ability to appoint its own specialist staff.

The absence of specialist staff was one of the failings identified in the aftermath of the FitzPatrick trial collapsed. The trial of Mr FitzPatrick ended in May 2017 when Judge John Aylmer directed the jury to acquit the former banker of all charges.

The trail came at the end of a hugely complicated and expensive investigation by the ODCE which Judge Aylmer ruled was fatally flawed. During the trial it emerged that the ODCE solicitor in charge of the investigation had never been involved in a serious criminal investigation before, and that he had mishandled the taking of evidence from key witnesses.

A report on the collapse of the trial was prepared by the Director of Corporate Enforcement, Ian Drennan, but is not being published following advice from the Attorney General, Seamus Wolfe SC, that to do so would expose confidential information about how the ODCE conducts its work.

However an account of the collapse of the trial is being reviewed by the Cabinet and is likely to be published later today by the Minister for Business Enterprise and Innovation, Heather Humphreys.

The report, which has been seen by The Irish Times, notes the taking of evidence to a standard needed for a criminal trial is a painstaking and highly complex undertaking, requiring specialist training and experience to ensure any evidence collected is of a sufficiently high standard to be admissible in a court.

“As the civilian personnel involved in the statement taking process - including, among others, personnel within the ODCE - lacked this specific expertise, this resulted in a judicial finding of coaching, contamination and cross-contamination of the main witnesses’ evidence, factors which Judge Aylmer identified as “the most damaging of the failures to a ffair trial”, the report said.

The judge noted that the failings by the ODCE inquiry “was not done in an intentional or premeditated way”, the report said.

The likely approval by the Cabinet today of the establishment of the ODCE on a new footing and the enhancement of its powers, reflects recomendations made in a recent report by the Law Reform Commission but are measures that were already in hand.

The Law Reform Commission’s report, which reviewed potential regulatory reforms, the fraud law and other matters in the wake of the banking collapse, is being examined by the Review Group of Anti-Fraud and Anti-Corruption Structures, which is chaired by James Hamilton.

The new authority being suggested to the Cabinet today would have up to three full-time commissioners.