Man cleared of murdering partner who he said fell down stairs 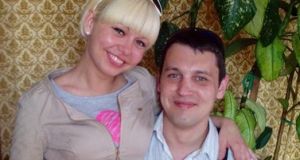 Renars Veigulis with his partner Rita Apine. Photograph via Facebook

A man who was charged with murdering his partner but maintained from the outset that she fell down the stairs of their home has been acquitted by a Central Criminal Court jury.

Following the not guilty verdict Justice Tara Burns thanked the jury of eight men and four women and told Renars Veigulis: “You are free to go.”

Mr Veigulis (32), a Latvian national with an address at Bridge street in Freshford, Co Kilkenny, was charged with murdering Rita Apine (29) at their home on or about May 14th, 2017.

Mr Veigulis maintained from the outset that he was playing with his daughter in the living room and heard a “boom, boom, boom” from the hall. When he looked into the hallway he saw Ms Apine at the bottom of the stairs with blood coming from her head.

A pathologist said Ms Apine’s injuries were not consistent with a simple fall down the stairs and that she had never seen some of the injuries caused by such a fall.

Mr Veigulis’s defence barrister Michael Bowman SC, instructed by Tony Collier Solicitors, asked the jury not to convict on the basis that the pathologist had not seen such injuries before. “You fall down stairs in as many ways as there are people who fall down stairs,” he said.

The jury took 10 hours and 21 minutes in their deliberations.

Mr Veigulis wiped his eyes and hugged his lawyers following the not guilty verdict.

Gardaí were first alerted to Ms Apine’s death when Mr Veigulis called emergency services and said: “Hello can I talk with Kilkenny ambulance. Please, my wife has fallen down the stairs.”

On-call doctor Leonard de Villiers told the jury that he observed a “big gash” to the right hand side of Ms Apine’s head.

Both of her eyes were swollen shut and there was bruising to a cheek of her face and one of her hands.

The jury has heard that paramedics resuscitated Ms Apine at the scene and took her to hospital but she died later that day.

Gardaí began a murder investigation when forensic experts found blood spatter on the walls and Deputy State Pathologist Dr Linda Mulligan said Ms Apine’s injuries were not consistent with a “simple fall down the stairs”.

She said the deceased died from massive blood loss as a result of blunt force trauma to the head. There were three separate “full thickness lacerations” over the right side of Ms Apine’s head.

They were in close proximity but all had “different shapes” and “different impact surfaces” .

She also noted bruising to both eye areas which were usually caused by direct trauma to that area of the face. She said the deceased had bruising to both forearms which indicated blunt force trauma and “possibly represent defensive injuries”.

However, when the bruising to the forearms was considered in conjunction with injuries to Ms Apine’s legs, she said a fall down the stairs could not be “excluded” as the cause of those bruises.

Overall, Dr Mulligan said Ms Apine’s injuries were not consistent with a simple fall down the stairs.

Mr Bowman told the jury that what happened to Ms Apine was not a “simple fall down the stairs” but could have been a “complex” fall and that “you fall down stairs in as many ways as there are people who fall down stairs.”

He asked the jury not to convict based on the fact that the pathologist had never seen such injuries before.

Dr Stephen Doak of Forensic Science Ireland told the jury: “There was more to the event than someone just landing at the bottom of the stairs. These blood-staining marks are significant and I felt there was a forceful event that occurred at the time.”

Dr Doak said he also found hair swipe blood patterns on the wall of the stairs. While he said that this suggested to him an “energetic event”, Mr Bowman said that the scientist had not considered the evidence given by the accused man, that he had moved the body and attempted resuscitation.

This, Mr Bowman said, combined with the fall could have accounted for all the blood staining observed by Dr Doak.

He said he returned to the house at Old Bridge Street on May 17th and used a chemical based substance known as luminol which “lights up” blood in a darkened room as he had previously formed the opinion that something was not quite right, namely that there were “missing areas of blood”.

He said he sprayed the chemical onto the wall of the stairs and believed there had been a “washing up incident” of the blood-staining.

“The person who wiped this wall had a blood-stained sponge or cloth and left this marking which was not visible to the naked eye but was visible to the chemical eye,” said Dr Doak.

In conclusion, Dr Doak said that after he had used luminol, he was of the opinion  there had been an active attempt to wipe out blood-stained patterns on the interior walls behind the front door.

Mr Bowman questioned a claim there was evidence of blood being cleaned from one wall, telling the jury that nobody found a “stitch of evidence” of any cleaning equipment being used and none of the people arriving at the scene smelled detergent or noticed wet walls.

In his Garda interviews, Mr Veigulis denied he had cleaned up.

When asked how Ms Apine had three different injuries to the side of her head, he said he was “not an expert. That’s for the experts”.

It was put to him that a paramedic noticed “a lot of bruising” on Ms Apine’s face.

“I couldn’t see any bruising on her face,” Mr Veigulis told gardaí­.

It was put to him that blood spatter was found on his top and blood had been “cleaned” from a wall. All of these things suggested Ms Apine was assaulted.

Gardaí said they wanted to find out what happened. Mr Veigulis said the situation was very hard for him. He said he loved his wife and had “never hurt her”.

He said he had “no idea” how blood was cleaned from a wall.

When it was put to him that he wiped blood from the wall, he told the detectives: “Maybe you did it. Maybe you wiped the walls. I didn’t see you. You didn’t see me.”

Dr Sandra McGrath found blood-staining on the sleeve of Mr Veigulis’s hoodie, which she said resulted from force being applied to wet blood. She said the force could be made by a strike into wet blood or airflow from the body.

Mr Bowman said this spatter pattern could have been caused by people walking through the pool of Ms Apine’s blood and did not mean that he struck Ms Apine.

At the scene Mr Veigulis told Garda James Keogh that he had been playing with his daughter in the living room when he heard a “boom, boom, boom” and Ms Apine crying.

He told the garda that he went into the hallway where he found Ms Apine at the end of the stairs.

Following his arrest, he maintained in Garda interviews that she fell down the stairs.

In his closing speech to the jury Mr Bowman accused the prosecution of engaging in “pseudoscience” to convict a young man who had lost his partner in tragic circumstances. He told them that if they stress-test the evidence relied on by the prosecution, they will find that it comes up short.

No weapon was found, he said, despite extensive searches of the house in circumstances where Mr Veigulis could not have left his home to dispose of a weapon.

If his hands were the weapon used, he said, bruising or cuts would have been obvious to gardaí who spoke to him that day.

No weapon was found, he said, because there was no weapon.

Vincent Heneghan SC, for the prosecution, pointed to the pathologist’s evidence and that of Dr Doak and Dr McGrath. He said their evidence could only lead to the conclusion that Ms Apine was assaulted.