‘Hundreds’ of extra PSNI officers needed for Border after Brexit 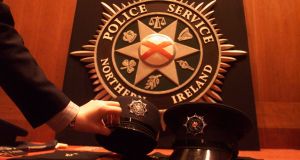 “We cannot afford to sleepwalk into a situation where, at the last minute, officers are redeployed from cities and towns.” Photograph: Cathal McNaughton/Getty Images

The Police Service of Northern Ireland’s representative body, the Police Federation, has called for the appointment of “hundreds” of additional officers to help police the Border after Brexit.

Mark Lindsay, chairman of the federation, said on Wednesday that “certainty, direction and clarity around Brexit” were required.

“The political turmoil around Brexit is for politicians to resolve, but what we are saying is: accelerate contingency planning to prepare for what happens from April 1st,” said Mr Lindsay.

“We cannot afford to sleepwalk into a situation where, at the last minute, officers are redeployed from cities and towns such as Belfast, Ballymena or Coleraine to some of the major crossing points along the 310-mile border with the Republic of Ireland,” he added.

“We need hundreds more officers if the UK crashes out of the EU without a deal. The case has already been made by the PSNI for more resources, and decisions are now overdue,” said Mr Lindsay.

The PSNI is to recruit 102 extra officers by April in preparation for Brexit, although it is known that the chief constable, George Hamilton, has already called for the appointment of some 400 additional officers to deal with the UK quitting the EU.

Earlier this month Mr Hamilton rejected claims that the Border threat after Brexit was being exaggerated. He said that “anything that re-emphasises the Border” presented challenges for the PSNI.

He warned that dissident republicans would seek to “exploit” any hardening of the Border, adding that a no-deal Brexit would “magnify all the demands and difficulties”.

Mr Lindsay, who represents rank-and-file officers, said properly addressing Brexit must not be left “on the long finger”.

“We simply cannot produce 300-400 officers overnight,” he said. “If government approval for an increase in the size of the PSNI isn’t forthcoming quite soon, then we will be left to confront major gaps in service provision as we race to meet requirements in a hard Brexit scenario,” he added.

“I am appealing to all concerned to make this a major priority and to get it sorted out without further procrastination,” said Mr Lindsay.