List of names of people linked to the Hutch family found 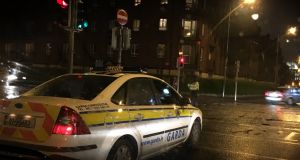 Kinahan-Hutch feud has provoked a major reaction from the Garda. Photograph: Bryan O’Brien

One of three men arrested during a Garda operation targeting suspected Kinahan gang members in Dublin has been released without charge.

However, two other men – both aged 58 and from Estonia and Dublin – remain in custody. They can be held for up to seven days without charge.

The three men were arrested in a house in Blakestown, west Dublin, on Tuesday morning.

The suspect, who has since been released, is in his 30s and was being questioned about the seizure of cocaine valued at €5,000 at the property.

However, gardaí also found a list of names of people linked to the Hutch family, along with details of their movements, and there are fears it was a list of potential feud murder targets.

They are working on the theory that the Estonian man had been flown into Ireland by the Kinahan gang which was set to pay him for carrying out gun murders.

The Kinahan-Hutch feud has to date claimed 11 lives, with all but one of the killings perpetrated by the Kinahan gang.

The shootings have provoked a major reaction from the Garda, including covert surveillance on key targets and a significant armed presence on the streets in some parts of Dublin.

Because of this, gardaí believe the Kinahan gang has been trying to bring in foreign gunmen who would not arouse suspicion because they were unknown to the authorities here.

However, the Estonian suspected gun for hire was arrested after an intelligence-led surveillance operation. Along with the 58-year-old Dubliner he was detained with, he is being questioned under Section 50 of the Criminal Justice Act.