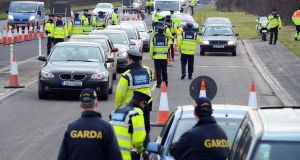 Gardaí inspect vehicles at a checkpoint in Co Dublin. Under new proposals it appears the full-strength capability would be slimmed down to 600 members. File photograph: Eric Luke/The Irish Times

Sweeping changes are being considered which would effectively abolish the Garda Traffic Corps in its current form.

The plans are under consideration by senior Garda management in response to the inflation of alcohol breath testing data over many years. It has also emerged in recent weeks that 14,700 motorists were wrongly convicted in the courts after being summoned in error.

Under the new plans, Garda personnel deployed to the Garda Traffic Corps would do a two-year period of service and then move on to other posts in the force.

The Garda Traffic Corps peaked at 1,200 members before falling back to around half that size as cutbacks in the Garda began to impact frontline policing.

However, under new proposals it appears the full-strength capability would be slimmed down to 600 members.

The nature and even the name of the corps would also be changed. Informed sources said it “be more of a roads policing unit”.

The unit would be involved in a wider range of activity. It would move away from the heavy dependency on speed checks and breath testing and checkpoints as a yardstick of activity.

“There will be more use of things like automatic number plate recognition (ANPR) technology and more general policing on the roads to intercept criminal gangs,” said one source.

ANPR technology runs off a camera system in Garda cars. The cameras automatically read number plates of passing vehicles and flag those that have been reported stolen or should not be on the roads.

As part of this, it is anticipated that the majority of roads policing members would serve a specific term. The practice of “getting into the traffic corps and staying there for a full career” would be brought to an end.

A small number, perhaps between 10 per cent and 20 per cent of staff, would serve longer periods in order to provide continuity of service and guidance and supervision for new colleagues.

New recruits to the Garda would spend a 10-week period in roads policing to gather experience.

Currently, the Garda National Traffic Bureau based in Garda Headquarters plans roads policing policy and liaises with other stakeholders such as the Road Safety Authority,

Separately, the executive of the Association of Garda Sergeants and Inspectors (Agsi) is meeting in Dublin today to consider what it believes is a directive to its members to amend the details of drink-driving checkpoints recorded on the Garda’s computer database.

Agsi has told its members to make no changes to records until it secures more information on the matter.