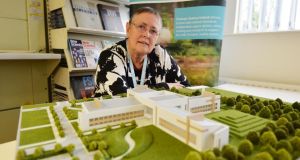 Forensic Science Ireland director Dr Sheila Willis with a model of the State’s new forensic science laboratory, work on which is due to begin later this year in Co Kildare. Photograph: Alan Betson

The body in charge of analysing crime scene forensics has said a new €60 million laboratory will bring the processing of DNA in line with international standards.

Work on the State’s new forensic science laboratory is due to begin later this year in Co Kildare and will greatly enhance ability to investigate crimes.

“It will bring us in line with best practices for the production of DNA results,” she said.

“With human beings there’s always the possibility of a mistake; the risk of mistake is higher in a non-suitable environment than it is in a purpose built facility that’s designed for the work that’s being carried out.

“We’re not putting out anything unless we’re happy to stand over it but the amount of effort [for] that in a facility that’s not suitable is quite tricky.”

Construction of the new 9,550sq m laboratory was put out to tender by the Office of Public Works (OPW) this week.

Crime scene examination is conducted by the Garda National Technical Bureau, which consists of highly-trained expert personnel in the areas of fingerprints, ballistics and firearm examination, and the mapping of crime scenes.

FSI, however, assists with the investigation of violent and sexual crimes, among others, with body fluid identification techniques and DNA technology.

It manages the State DNA database system, considered a major intelligence resource for the investigation of crime, currently holding about 11,000 samples taken from suspects and people convicted of serious crimes, as well as from crime scenes.

Last October, Minister for Justice Frances Fitzgerald said a portion of the increased €2.5 billion budgetary allocation to her department would help fast-track the provision of the new laboratory, something that was “badly needed”.

“I pay tribute to Dr Sheila Willis and the staff of the laboratory who have done enormous and important work but in very poor facilities,” she told the Dáil.

“It is much needed and very important in terms of criminal trials and the kind of forensic evidence that can now be produced.

“An important decision on capital expenditure, therefore, has been made to get that process started in order that the building will be completed by 2019 instead of being started then.”

Funding was allocated in the 2015 capital expenditure programme for the construction of a purpose-built lab, having been cancelled in 2009 as a result of the financial crisis.

The new facility will be built at Backweston in Co Kildare and expressions of interests in its construction must be filed to the OPW by May 8th.

FSI is currently located at Garda Headquarters in the Phoenix Park but will move to Co Kildare once the new facility is complete.

The database is populated with unidentified DNA profiles from crime scenes. Such “cold-case” profiles can be matched with DNA profiles uploaded from individuals under criminal investigation, convicted criminals and former offenders.