Nicola Collins: woman killed in Cork is laid to rest 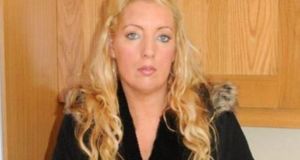 Nicola Collins: “Nicola gave so much, and Nicola had so much to give,” said priest Fr Pádraig Walsh. Photograph: Provision

The funeral has taken place, in her home town of Tralee, of mother of three Nicola Collins (38) who was found brutally killed at an apartment in Farranree in Cork city early on Monday.

The parish priest of St Brendan’s in Tralee, Fr Pádraig Walsh, spoke of “the dreadful reality” of increased violence in Irish society.

And at the end of a simple but moving ceremony the congregation at the Church of Our Lady and St Brendan heard from Nicola’s younger sister Carly, who is studying for a doctorate in Barcelona, about Nicola’s struggle with life, of her unfair share of suffering, of her beauty, prowess at the piano at a young age, her tendency to be very hard on herself and her honesty and humour.

The congregation – of around 200 – had gathered “with a great sense of shock, a great sense of loss, a great sense of sadness”, Fr Walsh said in welcoming Nicola and Carly’s mother Kay Drew, her father Michael Collins and her three sons, Nick, Adam and Michael. The priest also extended his sympathy to the late Ms Collins’s former husband Elaije.

Since the news broke, people had lived with a sense of disbelief, Fr Walsh said.

“Nobody deserves to die as Nicola did and we struggle to come to terms with her death and the way she was taken from us,” the priest said.

“From a distance people will look at her death and look at the increased levels of violence in Irish society. And from a distance Nicola’s death will be seen as another statistic in this dreadful reality of increased violence. But for her family, for her friends, this is no statistic; it is the tragic loss of a daughter, a sister, a mother and a friend,” Fr Walsh said.

The manner in which she was taken meant she had no time to say good bye, but even in her last visit to her former home in St Brendan’s Park, Tralee some weeks ago she called to see a former neighbour who was ill.

“Nicola gave so much, and Nicola had so much to give,” Fr Walsh said.

Prayers of the Faithful included those for people suffering from addiction, and for the emergency services, the gardaí and the community in Farranree, Cork.

Nicola’s mother, Kay, who uses a wheelchair, brought up the offertory gifts.

The funeral mass was adorned with hauntingly sung hymns “Be not afraid” and “Amazing Grace”. At the end of the ceremony Carly spoke of how her sister always spoke with honesty and spoke her mind, but underneath people could sense her vulnerability and softness.

“My sister did not know how beautiful she was both inside and out,” Carla said.

“She probably even blames herself now. But Nicola, this was in no way your fault,” a tearful Carly said.

She said her sister was intelligent and gifted, had a brilliant sense of humour, loved music and cats.

Nicola’s coffin was covered in beautiful wreaths of pink and white flowers from friends and family with messages of love and loss. Nicola Collins has been laid to rest at Rath Cemetery, Tralee.