John Curran was hit over the head before being stabbed 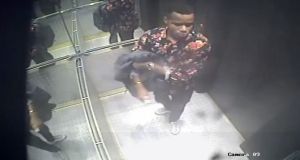 A suspect in the investigation into the murder of John Curran. Photograph: SA Police Service

South African police have released CCTV images of an unidentified man they want to question in connection with the murder of John Curran, an Irish charity worker who was stabbed to death in Cape Town last week.

Speaking to The Irish Times on Tuesday, police spokesperson Captain Ezra October said investigators in the murder case had released four pictures of a “person of interest” to local media in the hope that members of the public would be able to identify the man.

“The man was seen on a surveillance camera entering and leaving Mr Curran’s apartment and none of the people who know the deceased have been able to identify who this individual is. We are appealing to members of the public to come forward if they know who this man is,” he said.

Mr Curran (60) was a school principal in Ireland before he took a two-year contract in October 2016 as the director of education for Mellon Educate, a South Africa-based charity established by Irish entrepreneur Niall Mellon.

RT#sapsWC Cape Town Central Detectives seek the assistance in identifying person showned in the attached photos regarding murder case. Anyone with info that will lead to his arrest, can contact WO Shaun Bardien: 021 467 6320/8001 or 073 220 0653. TMhttps://t.co/XiMAD9wLAG pic.twitter.com/bo56fxEJW5

His contract had just finished and Mr Curran was due to return to Ireland in a few weeks when the tragic incident occurred. The well-liked teacher’s body was discovered at 10.30am last Wednesday morning inside his city centre apartment in Cape Town with multiple stab wounds.

Since then the police have been following a number of lines of inquiry in their bid to track down his killer.

Results of a post mortem carried out on the victim on Monday have revealed he was hit over the head with a blunt instrument before being stabbed to death with a knife.

Captain October said both the blunt instrument and the knife were found at the scene of the crime. The only item taken during the incident was a cell phone Mr Curran had bought hours before he was attacked.

Detectives have been able to successfully access the records of three other phones that Mr Curran had been using, but so far they have not found anything of use.

One of the lines of inquiry that police had been following was whether Mr Curran had been in contact with his killer before he struck. Captain October said investigating officers were hopeful that releasing the CCTV images, which are of an individual standing in one of the apartment block’s lifts, would lead to a breakthrough in the case.

Although Mr Curran’s body was found on Wednesday morning, the CCTV images appear to have been taken the day before. Each of the four pictures were taken on Tuesday, November 6th at 2.30pm.