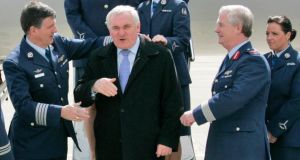 Lisa Smith (extreme right) may have overheard information on the Govermnet jet, but nothing of interest to Isis, military sources say. Photograph: Colin Keegan/Collins, Dublin

Lisa Smith (37), who resigned from the Air Corps in 2011, is currently in northern Syria with her two-year-old daughter after reportedly fleeing the town of Baghouz, the last significant hold-out of Islamic State, also known as Isis.

The Dundalk native joined the Army when she was 19 and served as a private in the 27th Infantry Battalion before transferring to the Air Corps, where she served as an attendant on the Government jet.

Ms Smith’s final role before resigning was in a transport unit where she worked as a driver for senior officers including the head of the Air Corps, Maj Gen Ralph James.

The Defence Forces were informed by gardaí in 2011, around the time she stepped down, that they suspected she had been radicalised by extremists.

An internal inquiry, involving military intelligence, was launched to assess what, if any, sensitive information Ms Smith may have obtained while serving, including during her time on the Government jet accompanying then taoiseach Bertie Ahern and senior ministers.

According to a Defence Forces source familiar with the process, it uncovered “nothing of significant concern”.

A Defence Forces spokesman said that while individual cases are not commented on, “Óglaigh na hÉireann maintains thorough intelligence and security procedures in order to identify and mitigate against any potential compromises”.

It is understood after her arrival in Syria around 2014, Ms Smith married a UK national who was killed in recent months while fighting for the terrorist organisation. She and her child are thought to be in the al Hawl refugee camp in northern Syria with hundreds of other wives and children of Isis fighters.

On Monday, the Defence Forces, the Garda and the Department of Foreign Affairs said they have still not received any information on her current status in Syria and are still trying to confirm media reports she is in some form of detention.

Gardaí have visited Ms Smith’s parents at their home in Dundalk and are continuing to liaise with them, a spokesman said.

An internal inquiry into Ms Smith’s military service would have taken place as a matter of course after suspicions of her radicalisation came to light, according to two retired senior officers.

“That would be par for the course,” said retired Lieut Col Michael C Murphy, who previously served in Irish Military Intelligence. He said it was unlikely Ms Smith obtained significant sensitive information while serving as a private in the army.

He told The Irish Times she may have heard some information while on the Government jet “but I wouldn’t think it would be much of interest to Isis.

“The one thing she could give them is security procedures, such as what is security like at [Air Corps headquarters] Baldonnel.”

While in the Air Corps “she was basically an Aer Lingus hostess in uniform,” said retired Brig Gen Ger Aherne. “The only thing is she may have, deliberately or inadvertently, overheard conversations between ministers and civil servants.”

While she had training to maintain and fire a weapon, Isis would have “no use whatsoever” for her on the battlefield due to her gender, Mr Aherne said.

Despite her alleged sympathies for Isis, it is not yet clear if Ms Smith has committed any offence under Irish law. Taoiseach Leo Varadkar said he believes she should be brought home following a security assessment.

Ms Smith attended prayers at the Islamic Cultural Centre of Ireland in Clonskeagh, Dublin, spokesman Dr Ali Selim has confirmed. “She attended a number of times in 2012,” he said, but was not well known to other attendees there.

Dr Umar al Qadri, of the Al-Mustafa Islamic Cultural Centre Ireland in West Dublin, believes from his inquiries that Ms Smith was radicalised “through social media and the internet”.

He said “the Imam in Dundalk never met her and he has advised people there who may have known her to contact the gardaí”.