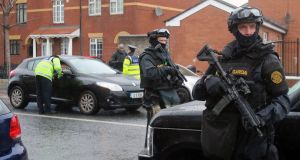 Armed gardaí in the north inner city of Dublin. A process is currently under way to withdraw firearms from gardaí who do not require them, mainly detectives not assigned to frontline duty. Photograph: Niall Carson/PA

The Garda is dramatically reducing the number of members carrying guns as it moves towards a model of having specialist units act as the force’s primary firearms response.

The process began last year after a review of the number of armed members was carried out and it was found that more than a quarter (27 per cent or 3,778 gardaí) were carrying firearms. This was close to the proportion of members who were armed at the height of the Troubles in the 1980s.

The 2019 review showed many gardaí who were assigned a firearms authorisation card, permitting them to carry a weapon, were working in desk jobs or in non-frontline areas such as cybercrime or immigration.

The Policing Authority had already raised concerns about the numbers of gardaí carrying firearms, as had the Garda Inspectorate, which in 2018 noted that the time devoted to firearms training in the Garda was “exceptionally high for an unarmed police service”.

A process is currently under way to withdraw firearms from gardaí who do not require them, mainly detectives not assigned to frontline duty. To date, almost 1,000 cards have been withdrawn as part of the ongoing process, according to figures obtained by The Irish Times.

Podcast: the origins of our unarmed police force

The Irish Times · Conor Gallageher: the origins of our unarmed police force

There are now 2,776 gardaí authorised to carry firearms – just under 19 per cent of the force. More authorisation cards are expected to be withdrawn by the end of the year.

The gradual increase in armed gardaí came about as a result of the expansion in recent years of specialist firearms units, such as the Emergency Response Unit (ERU) and the Armed Response Units (ASUs). At the same time, more detectives were being appointed who were authorised to carry firearms but they received much less training than their specialist colleagues.

The number of appointed detectives increased by a third (34 per cent) between 2016 and 2019, from 1,628 to 2,181, according to figures released under Freedom of Information (FoI) legislation.

“The big issue was, do we know how many are carrying guns? And if they are what are they doing with them,” said Chief Supt Brian Sutton of the Special Tactics and Operations Command, explaining the reasons behind the 2019 review.  He said the review found people who were promoted or assigned to a desk-based job were still being issued weapons despite having little use for them. “These were people who would only have their gun when they’re going to the range for training.”

The aim now is to move towards a model common in UK police forces, where fewer detectives carry weapons while armed response is provided almost exclusively by specialist units which have more training.

“We are reducing numbers carrying firearms and giving the people who need to carry them extra training,” Chief Supt Sutton said.

Training to expand the ASUs had been suspended due to Covid-19 but is expected to resume shortly. The aim is to have 378 ASU members operating out of 13 centres around the country, including 80 in Dublin, documents show.

The training regime is to be modified to include five levels of firearms training, ranging from level 1 for district detectives and drug unit officers up to level 5 for the ERU.