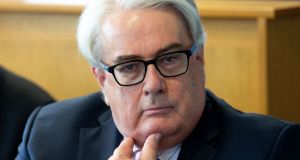 Chief Justice Frank Clarke used his announcement to issue a pointed rebuke to Michael D’Arcy, Minister of State at the Department of Finance, about how the guidelines committee will go about its work. Photograph: Tom Honan

Ms Justice Mary Irvine was the obvious choice to chair the new judicial committee set up to issue guidelines for personal injury payouts, which are blamed for the rising insurance premiums driving companies out of business.

The Supreme Court judge has built up a well-earned reputation in recent years for taking a realistic approach to compensation rates.

In November 2015, while on the Court of Appeal, Ms Justice Irvine made the first in a series of rulings credited with pushing down personal injury awards at High Court level.

She reduced the compensation for a woman who suffered neck, back and shoulder injuries in a car crash from €67,985 to €37,985.

The ruling by Ms Justice Irvine, and similar ones from her Court of Appeal colleagues, have had a ripple effect, driving down not only court payouts but settlement amounts agreed outside of court.

If Ms Justice Irvine was an obvious choice, then so was Mr Justice Kevin Cross, who hears the personal injuries list in the High Court so has more experience than most with this complex area of law.

But Mr Justice Cross was not on the list of seven judges announced by Chief Justice Frank Clarke, who will sit on the Personal Injuries Guidelines Committee. Many will see his exclusion as unusual and point towards the judge’s reputation, unfair or otherwise, of awarding particularly high payouts as a possible explanation.

“Insurance companies dread him,” one barrister who regularly appears before the judge commented.

Also absent from the list is Mr Justice Michael Twomey, who hears the Garda compensation list in the High Court. In contrast to Mr Justice Cross, the judge is regarded as a strident critic of high payouts.

The list of judges selected – as well as those not selected – demonstrates the Chief Justice’s desire to steer a middle course; to establish a reform-minded committee that will nevertheless take a cautious approach to the issue.

Mr Justice Clarke seeks to send the message that the judiciary knows compensation levels are a problem but it is not going to simply swing an axe at the current system.

He also used his announcement to issue a pointed rebuke to Michael D’Arcy, Minister of State at the Department of Finance, about how the committee will go about its work.

In an interview with a Sunday newspaper, Mr D’Arcy said the committee would select the five most common types of injury claims and issue guidelines for such cases by March.

Without naming Mr D’Arcy, the Chief Justice said “there could be no basis in fact” for such suggestions. Similarly, there is nothing to suggest payouts would reduce by more than 15 or 20 per cent as suggested by the Minister.

It was a stinging rebuke, dressed up in polite judicial language, to comments which were seen by some judges as an attempt to impinge on the committee’s independence.

On Thursday evening, Mr D’Arcy said he was merely outlining what he would prefer to see happen and was in no way seeking to “trample” on judicial independence.

The Chief Justice’s comments do not mean the committee will not take an approach similar to the one outlined by Mr D’Arcy, only that its members will not be railroaded into a politically expedient course of action.

So it appears the deadline of March 2020 cited by the Minister is an unrealistic one and guidelines will likely not be completed until well into the new year. For the many businesses facing closure due to skyrocketing insurance costs, they cannot come soon enough.