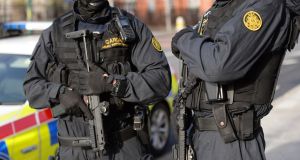 The man, who is aged in his twenties, is believed to have been involved in several break-ins in the Newry area of Co Down in recent days.

According to gardaí, he was stopped by a routine patrol at Rossfield Avenue, Tallaght at about 10.20pm on Monday night.

Gardaí attempted to pull the car over put it failed to stop and then collided with two patrol cars before speeding towards the M50.

One garda narrowly avoided injury in the incident.

The suspect’s car was chased on the motorway by a number of Garda vehicles as well as a Garda helicopter.

A short time later armed detectives performed a “controlled stop” on the car on the M50 and arrested the man and a female passenger.

The driver is currently being detained in Tallaght Garda station where he can be questioned for 24 hours.

The passenger, who is aged in her thirties is also being detained.

The car had been fitted with false registration plates, gardaí said. It has been seized for forensic and technical examination.