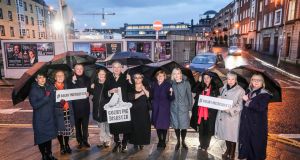 Representatives from a number of organisations at the launch of the Courting Disaster campaign at Hammond Lane in Smithfield in Dublin where it is proposed a new family law court be constructed. Photograph: Conor McCabe Photography/PA Wire

A number of organisations have called on the Government to allocate funding for a dedicated family law court at Hammond Lane in Smithfield in Dublin, describing current facilities as “archaic”.

The multi-agency campaign, Courting Disaster, said some of the most vulnerable members of society seeking to resolve family law proceedings are faced with “wholly unsuitable and inconsistent” court facilities “where not even basic needs are met”.

The groups say current “archaic conditions” significantly increase stress and anxiety in what are typically very sensitive cases and this can result in “volatility and even violence in the course of family law litigation”.

Four years ago the then minister for justice Frances Fitzgerald said a family law and children’s court complex would be built as part of a public-private partnership at Hammond Lane, with expected completion in 2020.

Minister for Justice Charlie Flanagan said he is committed to building a new family law centre and children’s court and that the Courts Service has been advised that €80million is available for the Hammond Lane project.

The Courts Service has put forward a plan, which would also include a new Supreme Court, at a cost of €140 million.

“The OPW and Courts Service are preparing plans for a suitable building that meets its needs within the available budget,” Mr Flanagan said.

“I am anxious to see the proposal finalised as soon as possible and I have met with the Chief Justice a number of times to progress the matter.

“In addition, I will shortly be bringing forward proposals, including the draft Scheme of a Bill, to establish a separate family court with dedicated family court judges within the existing court structures.”

Keith Walsh, a member of the Law Society’s child and family law committee said the campaign has been born out of “a sense of frustration by stakeholders”.

Micheál P O’Higgins, SC, chairman of the Council of the Bar of Ireland said the Hammond Lane development has been “held up inexplicably”.

“It really is affecting very fundamental rights of persons who do not need that in their lives . . . There aren’t sufficient areas for people to wait, consultation areas or basic facilities for children to be accommodated while cases are going on,” he said.

Tanya Ward, chief executive of the Children’s Rights Alliance said current facilities, particularly at Dublin District Family Court at Dolphin House, can have a “devastating” impact on some people.

“If you’re a woman seeking a barring order in Dolphin House, you could be in very cramped facilities, sitting beside the man who might have subjected you to a beating.

“It’s just not appropriate and that would actually dissuade some women who are seeking barring orders because they have to go through that and that’s quite terrifying if you’re with someone who’s coercive and intimidating.”