Suspect in fatal crash on run from Garda for eight years 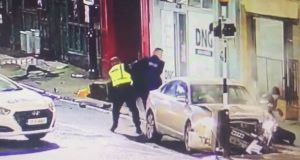 CCTV from the incident in Castleblayney where a vehicle collided with a parked car causing the death of Stephen Marron. Image: Newsfile

The chief suspect for a car crash that left one man dead and a garda injured has been on the run from An Garda Siochána for eight years for an almost identical incident in which the same garda was injured.

The suspect, a well-known criminal in his 30s from Keady, Co Armagh, now faces serious criminal charges arising from the fatal crash in Castleblayney, Co Monaghan, late on Tuesday night.

The man who died, Stephen Marron (47), was sitting in his Skoda Octavia on Main Street outside a fast food restaurant for which he worked delivering food.

A silver Audi A6 came up the street and swerved into the back of the parked Octavia at speed. The Octavia was spun around and hit a pole, killing Mr Marron with the force of the impact. The Audi then came to a stop less than 100m further on after hitting another pole.

At that point, the Armagh man driving the Audi got out and was taken into custody by two gardaí who arrived on the scene in a Garda car and van.

The deceased was last night described as a family man and devoted husband and father. He served as assistant sacristan at Saint Mary’s Church, Castleblayney, and Saint Patrick’s Church, Oram.

Garda Michael Devlin, who was injured on Tuesday night, had managed to get into the Audi A6 with the suspect and was being carried in the car as a passenger when it crashed into Mr Marron’s car. Garda Devlin was taken to hospital on Thursday night but has since been discharged.

The Garda Síochána Ombudsman Commission (Gsoc) has launched an inquiry into the incident. The dramatic turn of events began when the suspect from Armagh walked into Castleblayney Garda station just before 11.30pm.

Gardaí believe he may have been checking on an associate who had been arrested on suspicion of drink-driving earlier that night and was being dealt with in the station.

However, gardaí in the station recognised the Armagh man as the suspect at large since the 2010 incident. Garda Devlin pursued him and, outside the station, managed to get into the Audi A6 with him, in an apparent effort to stop him driving away.

However, while the suspect was driving the car, with the garda as a passenger, it hit Mr Marron’s Octavia very soon after leaving the Garda station, killing him and injuring the garda in the suspect’s car.

1 Bobby Storey: The IRA's planner and enforcer who stayed in the shadows
2 Covid-19: Travel restrictions to stay and 'green list' put on hold amid fears of second wave
3 Gardaí seek help in finding missing Roscommon toddler
4 Coronavirus claims one more life while 11 new cases reported in Republic
5 Rare whale dies after getting into distress in Wicklow Harbour
Real news has value SUBSCRIBE