Two men in their 20s, a man in his 40s and a teenager - also male - were arrested by gardaí 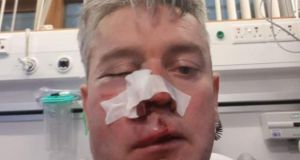 Gardaí have arrested three men and a teenager in connection with an assault on a soccer referee in Co Offaly earlier this month.

Two men in their 20s, a man in his 40s and the teenager - also male - were arrested on Wednesday morning.

They are being questioned about the assault of Daniel Sweeney after a soccer match in Horseleap on the Offaly-Westmeath border on Sunday, November 11th.

The 40 year-old referee was hospitalised as a result of the assault. His injuries included a fractured jaw.

The four were being detained on Wednesday evening under Section 4 of the Criminal Justice Act, which allows them to be held for up to 24 hours, at Mullingar, Tullamore and Birr Garda Stations in Westmeath and Offaly.