PSNI are investigating the death at a home in Devenagh Court in Ballymena, Co Antrim 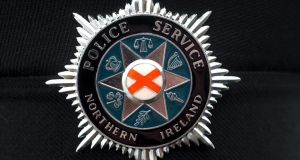 The PSNI has appealed to anyone with any information about the Ballymena death to call the independent charity Crimestoppers on 0800 555 111.

A murder investigation has been launched into the death of a 40-year-old man in Ballymena, Co Antrim.

Detectives from PSNI’s Major Investigation Team launched the investigation on Thursday after the 40-year-old man died at a house in the Devenagh Court area of Ballymena.

Detective Chief Inspector Peter McKenna, who is leading the investigation, said: “The death was reported to us at 3pm this afternoon. A post mortem examination has yet to take place but, at this time, I am treating this as murder.

“A 53-year-old woman was subsequently arrested on suspicion of murder and remains in police custody at this time. My thoughts go out to the victim’s family at this tragic time,” he said.

He appealed to anyone with any information to call the independent charity Crimestoppers on 0800 555 111 which is 100 per cent anonymous and gives people the power to speak up and stop crime.