Tributes paid to man killed as criminal rammed his car 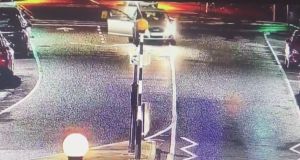 CCTV from the incident in Castleblayney where a vehicle collided with a parked car causing the death of Stephen Marron. 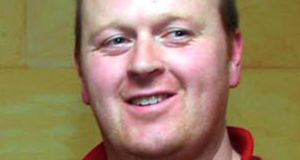 Stephen Marron was described as a devoted family man who also served as an assistant sacristan. Photograph: Jimmy Walsh

Tributes have been paid to married father of two Stephen Marron, the 47-year-old killed by a man fleeing from gardaí in a car on Tuesday night.

Mr Marron, who was active in the church and GAA in his local parish of Muckno, Castleblayney, Co Monaghan, was delivering takeaways when his Skoda Octavia was hit from behind at speed and he was fatally injured.

He was sitting in his car on Main Street, Castleblayney, outside the fast-food outlet he worked for waiting for his next job when was killed at about 11.30pm on Tuesday.

His car was hit at speed by an Audi A6, driven by a man from Keady, Co Armagh, who has been wanted by the Garda since 2010.

The impact of the crash caused Mr Marron’s car to spin from its parked position out into the road before it came to a stop when it hit a poll.

Gardaí and paramedics arrived but Mr Marron was pronounced dead at the scene.

The 34-year-old man who was driving the car that hit Mr Marron’s vehicle is known to the Garda and the Police Service of Northern Ireland and was arrested at the scene on Tuesday night. He has a long criminal record including multiple charges of drink driving and other motoring offences as well as assaults and thefts.

“Stephen was a loving and devoted husband and father, a son, brother and a good friend to many,” he said.

“Stephen was the go-to-man for everyone in the community of Muckno parish. He was a disciple of Jesus Christ who asks his followers to love God and love neighbour.

“Stephen bore witness to his faith through the generosity and kindness that he showed to all who were in any kind of need.”

The Garda Síochána Ombudsman Commission (Gsoc) has launched an investigation into the events that cost Mr Marron his life and saw Garda Michael Devlin injured.

Gsoc is obliged under law to investigate any case involving death or injury to a person at or around the time they have had contact with Garda members.

“Gsoc deployed a team of investigators to the scene and an examination of the incident continues,” a statement from the complaints body said.

The man driving the Audi A6 that crashed into Mr Marron’s car called to Castleblayney Garda station at about 11.30pm.

It appears he had gone to check on a friend who had been arrested earlier in the night for drink driving.

However, gardaí at the station recognised him as the suspect for a 2010 road traffic incident. On that occasion the suspect had failed to stop in his car when told to do so by gardaí and injured Garda Devlin in the process.

On Tuesday night, Garda Devlin ran out of the station after the suspect and managed to get into the Audi A6 as it was driven away by the suspect.

However, despite now having a garda in his car the suspect continued to drive away from the station and down Main Street, where he hit Mr Marron’s parked car and killed him.

Both cars were very extensively damaged and items of street furniture were strewn across the footpath and street, which remained closed for examination on Thursday morning.

When the Audi came to stop, the suspect driving got out of the vehicle and was arrested by two gardaí who arrived in a Garda van and car.

As the suspect was being handcuffed, a scuffle ensued and he was overpowered by the arresting gardaí. Garda Devlin was helped from the Audi by a passer-by who prised the passenger door open and helped him out.

While he suffered injuries and was taken to hospital, he has since be released and was expected to make a full recovery.

The suspect remained in custody on Wednesday night at Carrickmacross Garda station. He was being questioned under section 4 of the Criminal Justice Act, allowing him to be questioned without charge for 24 hours.

In November 2010, he failed to stop for gardaí at the townland of Latlorcan, Co Monaghan. During that operation Garda Devlin was injured.

However, the suspect was later arrested in the Kilnacran area of Co Monaghan and was charged with dangerous driving, having no insurance and drink driving. He was granted bail to appear before the courts in Monaghan in December 2000, but failed to appear.

A warrant for his arrest was issued, which remains live. However, because he has been living in Co Armagh, gardaí could not execute the warrant.

When the PSNI contacted him via the postal service they were told the address they were sending the correspondence to was not the correct address for the suspect.

And when the suspect was spotted by PSNI officers and they tried to move in and arrest him, their vehicle was blocked by an associate of the suspect’s.

When asked for a comment, the PSNI said it could “not comment on named individuals and no inference should be drawn from this”.

Gardaí investigate after man’s body found in Dublin house 12:14
Gardaí cannot prosecute people who breach midlands movement restrictions 22:42
Covid-19: One more death and 174 further cases confirmed in State 21:21
Garda checkpoints in Kildare, Laois and Offaly as restrictions come into force 20:34
Midlands lockdown Q&A: Firstly, is it a lockdown or not? 19:09