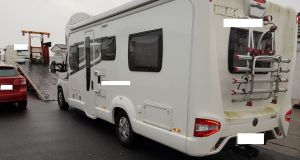 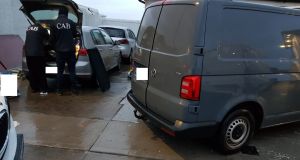 Cab officers search a vehicle during a search operation on Wednesday.

Gardaí have searched 10 properties, including accountants’ and solicitors’ offices, as part of an investigation by the Criminal Assets Bureau into a young Dublin-based target.

The criminal at the centre of the case is in his early 20s and assets valued at about €150,000 were seized from his home in north Dublin on Wednesday morning.

Because the target and some of his associates have a propensity for violence, Cab called on the Public Order Unit, or riot squad, and Armed Response Unit for assistance during this morning’s raid.

The head of Cab, Det Chief Supt Pat Clavin said: “The Cab investigation into assets suspected of being derived from criminal conduct is continuing and today’s search operation represents significant progress in the investigation.”

Five residential addresses were raided along with the offices of an accountant, estate agent and solicitor, where records of financial transactions involving the suspect were being sought.

A car garage in the Galway was also searched as gardaí tried to access records of recent transactions made by the chief suspect.

During this morning’s raid two people were arrested; one as part of a robbery investigation and another as part of an assault inquiry.

Documents and electronic devices were seized during the raids and they will now been studied in an effort to locate any cash or assets that Cab is not already aware of.

Gardaí suspect the vehicles were purchased with the proceeds of crime. However, the camper van was seized on suspicion it had been brought into the Republic without all the duties and taxes being paid.

As well as the vehicles, around £3,500 sterling was also found and gardai seized a woman’s Rolex watch valued at several thousand Euro.

The watch is believed to be owned by a female associate of the chief suspect, also in her 20s.

As well as a home in Dublin, the suspect has also bought at least one other property outside the capital.

Garda sources said he had a lot of unexplained wealth, adding that it was the focus of the inquiry now under way into the young criminal.

He was previously been investigated by gardaí as part of a group of people who had allegedly received substantial social welfare payments that they were not entitled to.

Gardai believe he has also been involved in thefts from building sites and forging €50 notes. He previously had around €40,000 taken from him by the Garda after it was found during a search and he was unable to explain where the money came from.

Gardaí have received criminal intelligence that the suspect is also involved in the drugs trade. However, those allegations are still being investigated by the Garda.

The suspect has more than 10 convictions, none of which are for drug-related crime.

The target of the raids is a young criminal who does not have any national or media profile.

However, Cab officers have over the last couple of years embarked on a large number of investigations into the operations of middle and lower tier criminals.

Gardaí are anxious that the capability and wealth of emerging criminals is degraded by assets confiscations and convictions, even for relatively minor crimes, before they become established in the underworld.

Det Chief Supt Clavin has visited every joint policing committee in the country since taking charge of Cab. In media interviews he has encouraged members of the public to contact Cab with information about people in their communities who appear to have unexplained wealth.