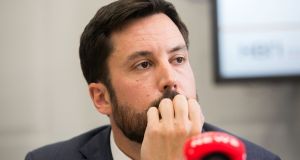 Minister for Housing Eoghan Murphy said he ‘can’t condone that kind of activity, or officials from any local authority being involved in that type of activity’. Photograph: Gareth Chaney Collins

The Government may look into whether councils around the country have paid “security” or protection money to ensure houses can be built without anti-social behaviour, it has emerged.

The High Court this week heard that Dublin City Council paid protection money to the leader of a Dublin drugs gang, and also to a man who was connected to three murders.

The court was also told two council workers suggested to construction companies they use the services of the two criminals. The money was allegedly paid so that council houses could be built in west Dublin.

The city council has denied the allegations. In a statement on Wednesday it said it “does not condone the payment of protection money by any of its contractors” and “no payments were made by the city council to the individuals concerned”.

Earlier, Minister for Housing Eoghan Murphy said he had been unaware of the matter.

“I can’t condone that kind of activity, or officials from any local authority being involved in that type of activity.”

He said he was awaiting a report from the council.

“Dublin City Council have assured me through officials that they are investigating it and will report back to me when their investigation is concluded.”

A senior source said the Minister was likely to consider those findings before deciding on what next steps need to be taken.

At this stage, the department will consider looking at the issue in the round and exploring whether the practice is more widespread across other councils.

“It may be that this is particular only to a certain geographical area. But the question of other potential instances obviously raises its head and is the logical next question,” a source said.

It is understood that any follow-up investigations would also involve the Department of Justice. It is not known how long such an examination would take.

Speaking to The Irish Times, Minister for Justice Charlie Flanagan said he was “disturbed” by reports that Dublin City Council was paying “security” money to the leader of a Dublin drugs gang.

“These allegations impact greatly on the rule of law which is fundamental principle of democracy.”

The council said it was “arranging for an independent investigation to be carried out into all aspects of its involvement in this matter”.

It said it had been aware of “an extraordinary level of intimidation and criminal activity directed at this contractor’s staff, the city council’s own staff and at the building site”.

Gardaí were “fully appraised by city council staff of the very serious difficulties being experienced by the contractor on the site”.

The council said it was “concerned” that two staff members were identified in the High Court “without regard to their personal safety and without having been given notice”.

“It is worth pointing out that both of these officers co-operated fully with the Cab investigation.”

The High Court was told “an official of Dublin City Council” informed contractors if they paid the two men “no problems of an anti-social nature” would occur on site.