‘We’re trying to get to the bottom of this,’ Eoghan Murphy says 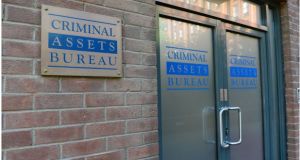 Asked could there be more criminals or more cases involved, the garda commissioner Drew Harris said: “Investigations are ongoing. This is an incident that does seem like it deserves further attention and further examination and I expect that to happen in terms of our further enquiries in respect to this.”

Minister for Justice Charlie Flanagan said he was “greatly disturbed” by reports that Dublin City Council was paying “security” or protection money to the leader of a Dublin drugs gang.

“I am greatly disturbed at reports that the county council have been in some way complicit in arrangements which would appear to be totally unacceptable. I look forward to receiving further reports on this issue and I trust if there are any criminal investigations that they would continue at pace for and on behalf of the Garda Síochána, ” Mr Flanagan said on Wednesday

Minister for Housing and Local Government Eoghan Murphy said he was not aware Dublin City Council was paying “security” or protection money.

He told RTÉ’s News at One he has asked officials in his department to speak to the city council to get as much information as possible. “I cannot condone this.”

Mr Murphy said he first became aware of the issue on Wednesday morning and had instructed his officials to find out what is happening.

“We’re trying to get to the bottom of this.”

On Tuesday the High Court heard Dublin City Council was paying “security” money to the leader of a Dublin drugs gang, and also to a man who was connected to three murders.

The court was also told that two council workers suggested to construction companies they use the services of the two criminals.

Most of the amount was cash in bank accounts linked to O’Driscoll and Reilly as well as a mobile home in Co Wexford and a “classic horsebox”, which the court agreed were the proceeds of crime.

Cab claimed the two men had a number of income streams including drug dealing in Ballyfermot and other parts of Dublin, organised burglaries, tax offences and extortion; all of which paid for lavish lifestyles including foreign holidays in Ibiza, Florida and other places.

O’Driscoll is a drugs gang leader originally from Ballyfermot with 20 convictions. He was also once found keeping a female jaguar and an African serval in his garage in Ballyfermot. The court was told Reilly ran O’Driscoll’s drugs business across a number of housing estates in Ballyfermot and has been linked to three murders, though he denies any involvement.

Benedict Ó Floinn SC, on behalf of Cab, said: “The court could ask itself what is going on in this city when not only construction companies but Dublin City Council” was paying men like O’Driscoll and Reilly so that “desperately needed housing could be built”.

Sinn Féin TD Aengus O Snodaigh said on Wednesday that he had informed Dublin City Council of the practice of paying protection money to criminals some time ago and had been frustrated when action was not taken immediately.

He added that he was concerned criminals elsewhere in the country would try to extort “lots of money” on other building projects. People in the Cherrywood area of Dublin had been aware “that some skulduggery was happening”.

“We are trying to encourage builders to build and we don’t want them extorted in any way.

“There is a need for answers about how this was allowed to happen.”

He also said he told Fine Gael Minister of State Catherine Byrne two years ago about intimidation of council workers.

Asked about this Ms Byrne said: “I did know about the incident, it was highlighted in the newspaper around 18-19th December. I received an email into my office on Christmas Eve. I didn’t see it until 29th, when it was brought to my attention by the girl in my office. I had rung the city council after I saw the incident had happened and talked to officials in the local area office who told me there had been an incident where there was intimidation and a JCB had been burned out and the driver injured.

“He assured me that everything was fine and that the council was dealing with it and the guards were involved. After that, on 29th, I looked at the letter and I was very concerned at what was in it. But I also noted from the letter that it had been brought to the attention of the gardaí in Clondalkin and other senior officials and really my job was finished at that stage because this was an investigation by An Garda Síochána.

“I want to make it very clear I totally condemn intimidation or extortion, and particularly in vulnerable communities,” she added.

The issue was also raised in the Seanad on Wednesday when Fine Gael Senator Martin Conway called for the Dublin City Council chief executive to “make a statement denying this has happened. If he does not, we have to assume it did happen.”

He asked if the person or people who are “supposed to have given the blessing and the nod and a wink” to pay protection money to criminal gangs had been suspended pending an investigation. “We need to know urgently because that type of behaviour is absolutely deplorable.”

Seanad leader Senator Jerry Buttimer said in response that it would be “absolutely unacceptable and disgraceful if Dublin City Council behaved in this manner and the people who authorised and paid that money should be held to account”.

On Wednesday evening Dublin City Council issues a statement in which it denied paying protection money to criminals.

Earlier Garda Commissioner Drew Harris said: “Anybody can employ a security firm and so that’s what’s happened. There’s a private industry set up to do that and that industry is regulated. In respect to that specific matter, I would say that I don’t think we’ve reached a conclusion in our investigations in respect of that and I know that Dublin City Council also are doing a review of this and there maybe more in respect to that. I don’t want to go much further than that because I don’t think today I can get the concluding comment in that matter.”

Asked could there be more criminals or more cases involved, he said: “Investigations are ongoing. This is an incident that does seem like it deserves further attention and further examination and I expect that to happen in terms of our further enquiries in respect to this. At this moment, I don’t think we’ve reached a conclusion.”

During the investigation of the extortion at the centre of Tuesday’s High Court case, three construction sites were identified, the court heard. These were Adston Ltd on the junction of Cherry Orchard drive and avenue; MDY Construction Ltd on the junction of Blackditch Road and Orchard Lawns; ABM Design and Build, which had a site at Elmdale Drive.

The High Court was told “an official of Dublin City Council” informed Adston that the council had employed O’Driscoll and Reilly to carry out “fence maintenance” at its site in the area. Adston was informed that if they paid the two men “no problems of an anti-social nature” would occur at its rapid build housing site.

Adston told Cab they paid €1,500 plus VAT per week to both Reilly and O’Driscoll and the company “considered this to be for protection”.

The High Court heard that the “fence maintenance” service O’Driscoll and Reilly were offering was “a fiction” and no such service existed. Instead, the court heard, they directed the anti-social behaviour and when weekly payments to them were commenced, the violence stopped.

A building inspector with Dublin City Council, JJ McKeon, told Cab when he had asked local youths “who could solve this problem” of anti-social behaviour on a site where he worked in Cherry Orchard, within 30 minutes he was met by David Reilly who assured him he could stop the criminal damage.

Mr McKeon, the High Court was told, later introduced Eugene Toolis of Westside Engineering, also working in Cherry Orchard, to David Reilly. Mr McKeon told Mr Toolis that “security costs” would have to be paid to Reilly; cash at €1,200 per week. This could then be reclaimed back from the council, with nine such payments eventually made.

MDY Construction Ltd was also approached by O’Driscoll and Reilly about providing “security” at its site in Cherry Orchard. The company initially declined.

However, stolen cars were then driven into the perimeter fence of the site, a Portacabin was burnt out and a digger was set alight after petrol was thrown on it while it was in use. The driver was hit by a brick and broke his ribs as he ran from the vehicle when it was set alight. Safety fears then brought work to a halt at the site, in December 2016.

When the “fence maintenance” services of Reilly and O’Driscoll were engaged in early 2017 the anti-social behaviour stopped.

The High Court was told the phone number of Reilly was supplied to MDY Construction by a Dublin City Council worker based in Cherry Orchard named in court as David Byrne, who retired from the council in 2017.