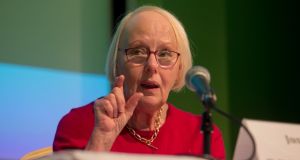 The State faces being isolated within EU law with the loss of a key ally following Brexit, but there are potentially thousands of jobs to be won if the Republic can take “any crumbs” from the UK’s table, a major legal conference has heard.

The Law Reform Commission’s annual conference, themed Brexit and Law Reform in Ireland, heard the Republic will be left as the only common law and English-speaking legal system in the EU after the UK leaves the bloc in March.

EU law operates a mixed system of common law and civil law. Common law is where laws are based on precedent set by the judiciary, whereas civil law places greater importance on set rules laid down in statute.

Most international companies use English common law to settle disputes, which has created a lucrative legal sector in the UK. After Brexit however, English and EU law are likely to diverge, meaning English rulings may become unenforceable internationally.

The keynote speaker at Wednesday’s conference, advocate general Gerard Hogan of the European Court of Justice, said Dublin has “got to face facts” in relation to “the de facto isolation of Ireland” after losing its key ally in the UK.

However, senior counsel Patrick Leonard said the vacuum left by the UK would give the State “an opportunity to reform the system, increase employment in the legal sector, and increase tax revenue”.

“There is an opportunity to deliver a more perfect ecosystem for companies and business,” he said. “We need to communicate outwardly the advantages we have in the legal system, as well as show we can handle the challenges that are entailed.

“We have an independent and impartial judiciary. I don’t think we should underestimate the value of that to international business. There are lots of countries around the world where you don’t have it.”

Law Society director general Ken Murphy said “lots of people” were “nibbling away and trying to position themselves” to fill the vacuum the UK will leave. “Ireland is quite rightly seeking to do so as well,” he said.

“Ireland clearly should be positioning itself for this. Any crumbs from the London table would be very significant for the Irish legal system given the disparity in size between the two jurisdictions.”

Mr Murphy said about 11 per cent of all solicitors listed in the Republic are now from England and Wales, many of whom rushed to register after the UK voted to leave the EU. However, apart from some rare exceptions, most have not yet moved to set up firms.

“Ireland has traditionally been a net exporter of solicitors, and – particularly at hard economic times in this jurisdiction – the UK was a safety valve for the surplus of solicitors here that would go to this enormous jurisdiction next door,” he said.

“I sometimes say we’re like a rowing boat sitting beside a super tanker. England and Wales are about 12 times the population and size of this jurisdiction. Hundreds and hundreds of Irish solicitors have followed that path.