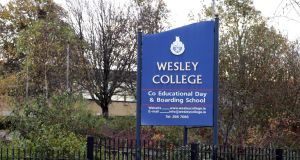 Wesley College has written to parents to say it has become aware of an attempt to abduct a pupil while the student was returning home from a work experience placement near the Dundrum Centre in Ballinteer last Friday. File photograph: Cyril Byrne

A Dublin school has warned parents about the alleged attempted abduction of a pupil in Dundrum.

A spokeswoman for Wesley College confirmed a letter was issued on Monday advising parents and guardians about the incident. The letter was sent after a 15 year-old boy was approached on the Ballinteer Road in Dundrum at around 4.30pm last Friday.

The school spokeswoman said “the child is alright, they didn’t get into the car.” She said the letter was issued as a matter of protocol when a parent informed the school about the incident by email.

The letter warned that “the college has become aware of an attempt to abduct a Wesley pupil while returning home from a work experience placement near the Dundrum Centre in Ballinteer last Friday 9th November.”

Signed by principal Christopher Woods, the letter said: “I would ask you to have a discussion with your child/children about this and ask them to be aware, and to take due care, when walking to and from school.”

A Garda spokesman said: “Gardaí are investigating an alleged suspicious approach of a male youth, 15 years. This is reported to have occurred in the Ballinteer Road area of Dundrum, Dublin 16, on 9th November 2018 at approximately 4.30pm.” Gardaí said their enquiries are ongoing.