Soldier charged with desertion among 22 in military courts since 2016 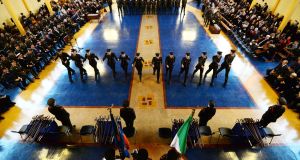 Members of the Defence Forces are subject to both military and civilian law. Military offences are dealt with through a separate courts system operated by the Defence Forces where the punishments can be much tougher. File photograph: Alan Betson

Twenty-two members of the Defence Forces have appeared before military courts in the past four years, including a private charged with desertion and a corporal accused of mistreating their subordinates.

Other offences dealt with in courts martial since 2016 include being drunk in charge of a military vehicle, assault causing harm and fraud.

The most senior member in the Defence Forces to be charged with an offence under military law was a captain accused of common assault and conduct prejudicial to good order and discipline. They were acquitted.

However, in practice, prison terms are extremely rare. Of the 22 soldiers who appeared before various forms of courts martial in the past four years, only one – a private convicted of common assault – was given a prison term. This was suspended for three months by the military judge.

The Defence Forces operates a small prison facility in the Curragh Camp which is guarded by military police when in use.

Over the period, 13 soldiers appeared before courts martial charged with offences, of which 11 were convicted of at least one offence, according to Defence Forces documents released to The Irish Times under Freedom of Information legislation.

A further nine soldiers brought appeals to a court martial against punishments imposed on them by their commanding officers. All but one of these resulted in either the charge being dismissed or the punishment being substituted with a less severe one.

Among the most serious charges was an accusation of desertion (leaving the military without permission and without intention to return) against a private, an offence which can in theory carry a life sentence.

The private was acquitted of desertion but convicted of the less serious charge of being absent without leave. They were fined 10 days’ pay and given a severe reprimand.

A junior non-commissioned officer was prosecuted on five counts including ill-treatment of subordinates. That charge was withdrawn but he was convicted of the lesser offence of conduct prejudicial to good order and discipline.

Engaging in “conduct prejudicial to good order and discipline” was the most common charge brought against Defence Forces members. It a broad offence which covers a wide range of infractions. It attracts a maximum term of two years’ imprisonment.

There were a total of nine charges brought against soldiers relating to alcohol, including being drunk in charge of a military vehicle and being unavailable for service due to drunkenness. Such offences were typically dealt with by way of fines and reprimands.

A sergeant was fined three days’ pay and issued with a reprimand for fraud involving documents while a similar charge against a lieutenant was withdrawn.

According to records, four charges against a private of negligent performance remain outstanding as the soldier was discharged from the Defence Forces before a trial could take place. They subsequently left the jurisdiction meaning the trial remains adjourned pending their return.