Deportations of people illegally in State rise sharply to nearly 300 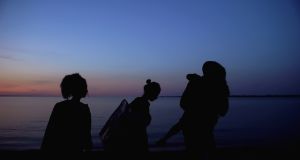 The number includes those who failed in their asylum application. File photograph: Getty

The number of people deported from Ireland last year who were here illegally or who had failed in their asylum application rose significantly to 293.

Of the 596 deportations that took place in the past three years, almost one in five – or 118 cases – involved people from Pakistan, according to figures from the Department of Justice.

The next largest category involved citizens of China with 87 cases, followed by Nigeria with 75 cases.

In total, 40 people from Albania have been returned to their country since 2017 with another 34 cases involving citizens of Georgia.

People from those two countries had been the subject of a targeted operation at Dublin Airport towards the end of last year, getting stopped before even leaving their aeroplanes.

The deportation figures also detail how 33 Brazilians, 25 Bangladeshis, 19 Algerian, 17 Indian, and 16 Malaysian nationals have been removed from the State since 2017.

State spending on these deportation flights came to €1.7 million in the period between the start of 2017 and June of last year.

However, the department said it could apply for 75 per cent of the cost of those flights to be recouped from the European Union Asylum, Migration, and Integration Fund meaning a potential refund of €1.285 million from the EU.

A department spokesman said every person served with a notification of intention to deport, following an asylum refusal or because they were illegally present in the state, was given an opportunity of “voluntary return”.

Under that arrangement, migrants can avail of free flights and a small financial grant to help them get re-established in their home country.

Those who qualify for the scheme can get €600 per individual or €1,000 per family to support “reintegration” through training or business grants.

A spokesman said: “It is only where voluntary return is not availed of will enforced deportation be considered, as a last resort.”