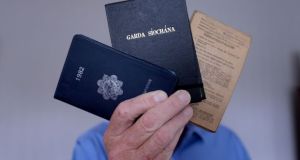 ‘Liam’ still has his notebooks from 1982

A former Garda member who was dismissed from the force in 1982 after senior management learned he was gay has said the public support for him when he first spoke out last July had not been followed up by the response he expected from the Garda or Government.

While Garda Commissioner Drew Harris had made available to him documentation that proved his sexuality was at the centre of his dismissal, and to which he had never been granted access before, he had not met Mr Harris since then despite repeated requests for such a meeting.

Furthermore, though Minister for Justice Charlie Flanagan had said “the standards and indeed the laws that applied in 1982 were wrong and would be completely unacceptable today”, there had also been no meeting with Mr Flanagan.

The former garda added there had also been no apology to him, something he said he would have expected. And while he had been offered a meeting with a senior civilian member of Garda staff, he believed this was not sufficient given the nature of his case.

“It is been very frustrating,” he said of the period since speaking out and having now decided to sue the Garda, Department of Justice and Attorney General.

“When I first told my story there was a lot of support; people who were public figures went on the radio and spoke at length about my story and about how shocking it was.

“And Fianna Fáil took it up and they called for a public apology. But then none of the things I would have expected to happen have happened. It was frustrating and disheartening and the whole thing has been very difficult.”

Now in his 60s, the former Garda member has opted not to reveal his identity but was interviewed using the pseudonym “Liam” by The Irish Times last year.

He said he has never come out as gay because he felt so scarred by his treatment at the hands of An Garda Síochána almost four decades ago.

He joined the force in 1980 and all of his professional appraisals were positive as his two-year probationary period progressed, with commendations for his work rate and professionalism.

But then, in January 1982, RTÉ set designer and gay man Charles Self was stabbed to death in a house in Monkstown, south Dublin. The Garda became convinced the key to his murder, which has never been solved, lay within the gay community in Dublin.

Liam was spotted frequenting the Hirschfield Centre, a gay venue in Dublin’s Temple Bar, by detectives working on the Charles Self murder inquiry, and in other areas frequented by gay men.

While he was interviewed about his movements several times within the Garda, he was never formally charged with any criminal or disciplinary offence and no findings against him were arrived at.

One evening in 1982, as he was at a briefing in his Dublin Garda station before going out on night shift, senior Garda officers came into the station and ordered him out of the room.

They demanded he take off his uniform and surrender it to them and that he leave. A short time later other Garda members called to his house to take his second uniform and other items issued to him as a garda.

That effectively completed his dismissal from the force, though he received no correspondence confirming his dismissal or the reasons for it.

Back in 1982, homosexual acts were illegal, though it was not against the law to be gay. Liam said he felt unable to fight his dismissal because nobody around him knew he was gay and he did not feel he could come out.

The personnel file he obtained about a year ago from the Garda, after years of correspondence, stopped with the glowing performance appraisals, with no reference to his dismissal. However, after he was interviewed at length by The Irish Times last July, Garda Commissioner Drew Harris furnished “Liam” with further documentation from 1982 which confirmed he had been dismissed because of his sexuality.

That document, signed by then Garda commissioner Patrick McLaughlin, details places where Liam was seen and where gay men in Dublin frequented at the time. It added that, apart from being seen in these places, Liam was “an excellent worker, good timekeeper and maintains a high level of cleanliness”.

McLaughlin then added: “I intend to dispense with his services at an early date.”

Nine months after signing off on Liam’s dismissal, McLaughlin resigned after the tapping of the telephones of two journalists, Geraldine Kennedy and Bruce Arnold.