Stephen McKinney (43) was ‘not prepared’ to accept wife divorcing him, prosecutors say 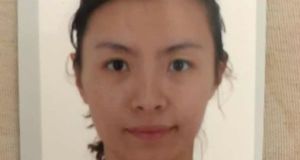 A controlling husband, tired of his wife but unwilling to accept the possibility of her divorcing him, forced her off the end of a Lough Erne cruiser hired to celebrate their upcoming 14th wedding anniversary, a murder trial heard on Wednesday.

Mr Weir told the jury of seven men and five women that when they had heard all the evidence, they would find “this was no tragic accident and you will be sure Stephen McKinney killed his wife”.

Trial judge Ms Justice McBride also heard that Ms McKinney had been “incapacitated” after taking the sleeping drug Zopiclone, obtained online by her husband, who “caused her to enter the water”.

Her body was recovered from Fermanagh’s Lower Lough Erne near Devenish Island within 40 minutes of her husband raising the alarm in the early hours of April 13th, 2017.

Mr Weir said while Mr McKinney had denied having anything to do with the death of his wife, when police arrived on the scene, during the four minutes it took them to dock, Mr McKinney did nothing to recover his wife, a non-swimmer, from the lough.

The prosecutor further claimed Mr McKinney gave conflicting accounts to police, authorities, family and friends as to how she came to be in the lough, after she had allegedly gone to secure the mooring ropes on their cruiser.

Mr Weir further revealed that months before her death, Mr McKinney’s wife had talked of divorcing him and of taking their children back to China, something he did not want.

Mr McKinney, originally from Strabane, but who lived with his wife and children in Flaxfield, Convoy, Co Donegal, now has an address in Castletown Square, Fintona, Co Tyrone.

In his opening, Mr Weir acknowledged the case against Mr McKinney was a circumstantial one, but that the strands of evidence were sufficient, when taken together, to support their case.

The court later heard of details of two emergency 999 calls made by Mr McKinney shortly after 1am, claiming his wife had “just ended up in the water”.

He told the second operator: “I tried to pull her back up and she went down...and she pulled me down.”

However, Mr Weir said that while Mr McKinney said he could see his wife in the water, “on his own account he does nothing to pull her out of the water”.

In conclusion, Mr Weir told the jury Mr McKinney was a “controlling man, tired of his wife, not prepared to accept her divorcing him and all the consequences that would entail for him and their children”.

The trial, expected to hear evidence from up to 100 witnesses over eight weeks, continues on Thursday.