Man (30s) who died in ‘tragic accident’ in Westport named 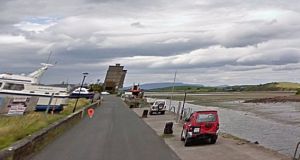 A general view of the Quay in Westport, Co Mayo, where the fatality occurred. Photograph: Google Street View

The man in his 30s who died in Westport at the weekend has been named locally as Sean Hynes from Ballina.

Mr Hynes’ body was discovered in the water by Westport Quay in Co Mayo shortly before 9am on Sunday morning. It is believed he may have fallen into the water accidently while out socialising.

A Garda source said the matter appeared to be a “tragic accident”.

His body was recovered from the water and taken to the mortuary at Mayo University Hospital, with the local coroner to carry out a postmortem on Monday morning.

A Garda spokesman said “investigating gardaí are not currently treating the death as suspicious, but will await the outcome of a postmortem to determine the course of their investigation”.

Local Mayo councillor Mark Duffy said the community was in shock following the incident and that his thoughts and prayers went out to Mr Hynes’ family.

“It is extremely difficult news for anyone in the community to receive today and we send our heartfelt condolences to the family,” he said.

In Co Kerry, a woman in her 40s died in a road traffic collision in Killarney.

Emergency services were called to the scene of the crash on the N22 at Brennans Glen, Killarney, shortly after 2pm on Sunday.

The woman was a passenger in one of the cars and was pronounced dead at the scene of the collision. The other two occupants of the car, a man and woman in their 70s, were taken to University Hospital Kerry for treatment.

The woman was understood to be in a critical condition, while the man’s injuries were described by gardaí as non-life threatening.

Two women in their early 20s in the second car were also injured in the collision. Gardaí are appealing for witnesses.