The acting Minister for Transport, Tourism and Sport at the reopening of the station, a pet project for him. The reopening was a previous election promise that was a condition of his support for the last government. Video: Simon Carswell 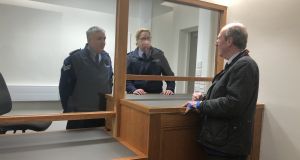 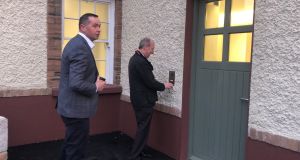 Shane Ross rings the buzzer at the refurbished Stepaside Garda Station - reopened at a cost of €1.5 million - in south Co Dublin at 7am. There is no answer.

He is surprised to find the door to the public office open next to it.

Inside, the public counter is bare and the room empty but it radiates with the freshness of new paint.

The Garda station reopened on Monday morning almost seven years after closing along with 138 other stations as part of cost-cutting.

“You are really welcome,” Ross, the former Independent TD, tells Sergeant Shane Curtis and Garda Helen Gillen as they emerge from a side-room.

The acting Minister for Transport, Tourism and Sport is beaming at the reopening of the station, a pet project for the 70-year-old politician. The reopening was an election promise that became a condition of his support for the last minority Fine Gael-led government in which he was a minister.

He tells the two gardaí behind the counter that he visited the station as a local six-year-old and was locked up to get a taste of incarceration.

Ross says his visit to the reopened station is “not unlike” that visit in 1956, though he adds: “It is a lot better now.”

Sgt Curtis tells him he is happy to arrange tours of the station, but by appointment only, and he does not mean an arrest.

“There is a cell there for you anyhow,” he tells Ross, joking.

Asked if the newly assigned gardaí were the envy of the force working in a new station, Sgt Curtis said: “We are the envy of a lot of people. It is great being back in the community.”

Outside, Ross dismisses the idea that his long-term campaign to have the Garda station reopened amounted to “pork barrel” politics - the American phrase describing government spending applied to local projects solely to bring money to a politician’s constituency.

Ross puts the reopening down to “people power” saying there was “a community uprising”. The station will be operational around the clock but will not be open to the public 24 hours a day.

“Everybody says it is pork barrel - or stroke politics - but it is needed. Because it is local, it doesn’t mean it is not needed,” he says.

The caretaker minister points to a recent increase in the number of burglaries in the area.

“I hope the people of Stepaside will sleep much easier in their beds,” he says.

Local Independent councillor Mick Fleming, who owns a butcher’s shop across the road, said this semi-rural, semi-urban area was “up-and-coming” and the station was “very badly needed.”

“The increase in population in the area has exploded and crime has risen so you can’t dispute that. It was a mistake to ever close it in the first place,” he says.

Local Peggy Durnin, walking past, says it is “brilliant” to see the station opened.

“Too many break-ins around,” she says.

She feels bad that voters here did not re-elect Ross in last month’s election.

“He should have got it,” she says.

Ross, now without a Dáil seat and out of politics when a new government is formed, does not see the moment as bittersweet.

“Today is sweet. There is no bitterness about it,” he says, standing under the Garda crest above the door to the public office.