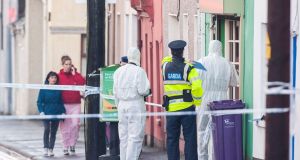 A Garda forensic team at the house on Bandon Road, Cork, where Cameron Blair was stabbed. Photograph: Daragh Mc Sweeney/Provision

“Every parent’s worst nightmare” is how the Bishop of Cork, Cloyne and Ross Paul Colton described the killing of 20-year-old student Cameron Blair in Cork on Thursday night.

Bishop Colton, who lives just over 100m from the scene of the crime on Bandon Road in the city, recalled how he and his wife Susan used to fret in the past when their own children went out socialising in the city as teenagers.

“We live in the area and students are part of the vibrancy of the area and even though our sons are now past that age, it’s still very vivid in our memory that whole experience of waiting for them to come home late at night,” he said.

“Something like this really is a parent’s worst nightmare and I tweeted last night when news of the stabbing started to break about the horror facing some family and I said how our thoughts and prayers are with their family.”

Bishop Colton said he did not know at that time the victim was someone he had met in his work as a pastor, administering to the Church of Ireland community in Cork.

“I now know, this morning, that he was Cameron Blair, a young person from this Church of Ireland diocese, who attended Bandon Grammar School, and who was confirmed by me in 2013 in St Peter’s Church, Bandon.”

“My heart goes out to the Blair family, especially Cameron’s parents, Noel and Cathy, and his brother Alan (17) as well as to Cameron’s wide circle of friends and peers, and indeed everyone who has been traumatised by this event.

“On behalf of everyone living in this part of Cork, and on behalf of us all in the Church of Ireland community in Cork, Cloyne and Ross I send them our sincerest condolences.”

The deceased from Ballinascarthy in west Cork was a keen athlete and rugby player with Bandon Rugby Club. He was due to line out in a match on Friday night.

A second year student at Cork Institute of Technology where he was studying chemical engineering, he had been working with his father in his west Cork business on Thursday before travelling to Cork city to attend a house party.

CIT president Dr Barry O’Connor described him as “an outstanding athlete and outstanding student who was very popular young man”.

“This is an appalling tragedy to see someone cut down in the prime of their life and everyone here at CIT is in shock – our heartfelt sympathies go out to Cameron’s family and friends,” he said.

Bandon Grammar School principal Ian Coombes said: “It is with great regret that we learned of a tragic incident in Cork last night resulting in Cameron’s death. Our school community is deeply affected, particularly senior students as he still has family members in the school.

“The management and staff extend our sincere condolences to the family and friends.”

Back on Bandon Road, Pat Duggan, who works in the Sportsman’s Arms across the road from the scene of the killing, spoke about the sense of shock and sadness in the local community.

“Last night we saw the commotion outside on the street. People were afraid to go out. We are in total shock. The area is fantastic. It is just a crazy thing that happened – that poor young fellow.

“For someone to go in to a house with a knife and do that to him – this just can’t go on. I feel so sorry for [his] family – it’s a terrible tragedy for them, unbelievably sad.”

Páirc Uí Chaoimh testing centre closes due to lack of kits 17:00
Cocooning Q&A: How does it work? Who must do it? Can people visit my home? 16:58
Coronavirus: Managing the surge in cases is a day-to-day battle 16:48
Man (30s) assaulted by group at supermarket in North Co Dublin 16:40
Irish flight bringing PPE from China arrives in Dublin 16:37