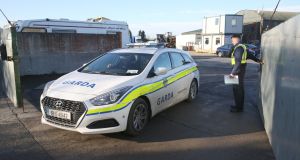 Gardaí at the scene of the shooting at an industrial estate on Killeen Lane in the St Margaret’s area Dublin. Photograph: Gareth Chaney/Collins

Two men wounded in Dublin’s latest gangland attack remain seriously ill in hospital having been shot several times in what gardai believe was a well-planned ambush by experienced criminals.

The attack was being linked to a gangland dispute between criminals based in the Baldoyle and Coolock areas of north Dublin and was being treated as a botched murder attempt.

Garda sources while both victims suffered multiple gunshot wounds, and one of them remained critical. One of the men was shot up to five times, including to the head.

Shortly after the attack in St Margaret’s, north Co Dublin, at 11.30am the suspected getaway car was discovered on fire on Greenwood Avenue, Coolock, north Dublin, about 13km from the crime scene.

Gardaí arrested two men close to the scene of the burning Black Citroen C4 car, registration 151 D 34526. Gardai have appealed to anyone who may have seen that vehicle in the vicinity of the shooting scene or where the car was set on fire to contact them at Swords Garda station.

The arrested men remained in custody on Friday night and were being questioned under Section 30 of the Offences Against the State Act.

They are both suspected of involvement in past gangland shootings and one of them was previously wounded in a gang-related shooting.

Both are in their 30s and are from north Dublin. One has more than 80 convictions, including for drug dealing, while the other more than 20 previous convictions.

The two men in custoday are linked to the leader of a major crime gang based in north Dublin and who has of late been associated with one side in the Drogheda feud.

However, a Garda statement on Friday night said the shooting is not linked to the murder of Keane Mulready Woods (17) in Drogheda last weekend.

The men wounded in the attack are both involved in the haulage sector. They were sitting in a blue Mercedes car outside a business premises on an industrial estate off Killeek Lane when a car arrived carrying a gunman, who walked up their car and opened fire.

The attackers then drove from the scene as the emergency services were called for the injured men.

The victims were attended to by paramedics at the crime scene before being taken to Beaumont Hospital and Connolly Hospital in Blanchardstown.

Gardai were intitially concerned the man who suffered the head wound would not survive. However, his prognosis has now improved, though he remained critical. The other man is also expected to survive.

The man wounded in the head is a 39-year-old from north east Dublin. He had previously been banned from being a truck driver in both Ireland and Britain for breaching safety rules.

His last conviction was recorded a decade ago and related to trespassing on a construction site. He had previously been convicted of theft and also has a conviction for a series of cheque frauds for modest amounts and for which he was given a suspended jail term.

The two suspects being held in north Dublin Garda stations last night can be questioned for up to 72 hours without charge.

While efforts had been made to burn out the suspected getaway vehicle in an apparent bid to destroy forensic evidence, some of the car remained intact and gardaí were hopeful it would yield evidence

The car was taken away for forensic testing by the members of the Garda Technical Bureau. The scene of the shooting also remained sealed off throughout Friday and was being examined by crime scene investigators.