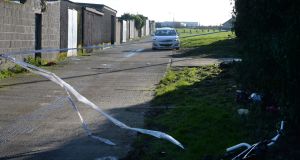 Rathmullen Park in Drogheda where it is believed Keane Mulready-Woods was murdered. Photograph: Alan Betson

The Drogheda gang feud that claimed the life of 17-year-old Keane Mulready-Woods has spread to the Dublin underworld and is likely to become protracted and even more complex, gardaí believe.

Senior Dublin criminals, one of whom is suspected of ordering the teenager’s murder last weekend in Drogheda, have now been drawn into the feuding on opposing sides.

Both Dublin gang leaders are suspected of involvement in a number of previous gun killings, including that of Alan Ryan, the Real IRA leader in Dublin who was shot dead in the city in 2012.

The leading Dublin criminal suspected of ordering the killing of Keane Mulready-Woods last Sunday was a close associate of Richard Carberry (39) who was shot dead last November outside his home in Bettystown, Co Meath, as part of the Drogheda feud.

While Carberry had lived in Meath for years with his family, he was originally from north Dublin and had many criminal friends still living there.

Gardaí now believe when Carberry was murdered one of his close associates was enraged and was intent on avenging the killing. Detectives also believe Carberry’s associate was assaulted recently by a number of young men linked to the same Drogheda gang that killed Carberry.

It is now suspected Keane Mulready-Woods was abducted, murdered and dismembered on the orders of Carberry’s associate to avenge both his friend’s murder and the assault he himself endured.

While that assault was minor, those responsible taunted their victim on social media in its aftermath; a development that has become a common feature of Irish gang feuds.

The man suspected of ordering the killing of Keane Mulready-Woods has been at odds with a north Dublin-based criminal for several years. Gardaí now believe that criminal has made an alliance with the Drogheda gang that killed Carberry.

It effectively means two Dublin gang leaders who have been at odds for years are now on opposing sides in the Drogheda feud, which greatly complicates the dispute.

Meanwhile, gardaí investigating the murder of Keane Mulready-Woods are making significant progress in the case. The teenager’s limbs were found in a bag in Darndale, north Dublin, last Monday night while his head and other remains were found in a burning car in Dublin’s north inner city on Wednesday morning.

They said on Friday night that DNA evidence had confirmed the head and other body parts were his.

A property in Co Louth that has been sealed off since last Tuesday is now regarded as the main crime scene.

A number of weapons have been taken away for examination, including knives found in an outhouse close to the property.

The deceased teenager was a junior member of one of the two feuding gangs in Drogheda.