Is it cheaper to cross the Border to stock up for Christmas?

More bang for (foodie) buck in Tesco and M&S up North, but smaller price gap for toys 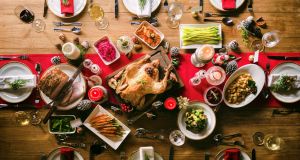 If you’ve never before attempted getting the Christmas feast to the table, there's plenty of fail-safe recipes to help you put on a real spread

We are very fond of counting the cost of Christmas round these parts but no matter how we have crunched the numbers over the past 10 years, and no matter how many corners we have tried to cut, it has always been very difficult to find ways an average Irish household can get through the festive season with change out of a grand.

The less-than-happy Christmas reality is that once all the food, booze, gifts, parties, presents, clothes, transport and the rest are added up many Irish families will spend well in excess of that amount on what is surely the most wonderfully dear time of the year.

Spoiler alert. It’s not the Republic.

We all lose the run of ourselves when shopping for Christmas food and we pile shopping trolleys dangerously high in the days ahead of the big day almost as if the shops were planning to close for good once Santa’s sleigh bells start to ring on Christmas Eve.

With all that food bought it is any surprise that on Christmas Day itself the typical Irish adults will consume around 6,000 calories and most of us will also put on an average of half a stone over the festive period. Sorry.

With festive season food being such a big deal, that is where we started.

We filled virtual shopping trolleys in Tesco and Marks & Spencer outlets north and south of the Border. We “bought” turkey, ham, mince pies, breakfast stuff, melon, plum pudding, vegetables, cake, party food, biscuits and chocolates and many – but not all – of the other things that might find their way on a typical Irish table next month.

Because we confined our food shopping expedition to these to retailers – to make the price comparisons easier – we had to “buy” some things that we’d not normally get (we’re looking at you Hovis Granary Original Medium Sliced Bread) and we had to jettison some things that are part of most Irish Christmases – we struggled to find black or white pudding in the UK, and as for spiced beef? How do our cousins across the Irish Sea get by without it.

Some of the measurements don’t match up because of the land of Brexit’s love of imperial measurements, but apart from that we reckon it is like for like north and south except when it comes to the prices.

First we went to Tesco armed with a list.

As you will see we did not go mad but, even so, the cost of our basket of the items came to €177.65 when we shopped south of the Border. When we took our trolley north the price came in at £126.59 which – using last week’s exchange rates – works out at €141.40. This means for that shop, the Republic was 26 per cent dearer.

We showed Tesco our list and it took issue with aspects of it. We were told the salmon appeared on the Republic’s site in error and the price of the stuffing, crackers (to eat) cake and crackers (to pull) in the Republic were now under review. It claimed our potato and parsnip comparisons were invalid because the varieties and countries of origin were different and we were told “promotional strategies” differ here and there which could distort comparisons. The spokeswoman also said if we’d bought our milk in a slightly difference combo we might have saved money south of the border and she cited higher VAT rate in the Republic (there is a 3 per cent difference) as well as currency fluctuations.

Saving almsot €40 is not too shabby but we were only getting started and we’d not even started buying the fancy stuff.

For that we went to Marks and Spencer. The food is lovely but the price discrepancies were anything but. Now we know we did not really need to buy all the party food or the Cheeseboard Christmas Tree (who does?) but it did look lovely and sure wasn’t the M&S Paddington ad awful cute!

When asked about the price differential a spokeswoman for the retailer said M&S works “hard to ensure we offer our customers in Ireland great quality products that are competitively priced. Like any business, we have to take into consideration a number of factors specific to the Irish market when setting our prices, such as higher employment, rental and operational costs.”

We moved on to booze, and back to Tesco.

Now let’s say that in the run-up to Christmas you need to buy some toys. We’ll limit it to two because – luckily – Santa Claus has got most of the other toys a family might need covered.

We called into Smyths and found an An Our Generation Sweet Stop Ice Cream Truck that we liked the look of. In the UK it is selling for £120 while in the Republic it will set you back €140. Cozmo the sassy smart talking robot – which we have played with and which is kind of brilliant – costs €239.99 while the price in the UK is £199. These two – admittedly dear – toys in the south come to €379.99 – while the euro equivalent across the Border is €356, just 6 per cent cheaper.

And finally there are the cards. Sometimes Pricewatch is hard on Christmas cards – and, in truth, we don’t send (or get) too many of the things. But they are still part of Christmas and some people love them, and who are we to judge? So, you buy 50 cards, they will cost you around a tenner. It costs €1 cent to post one, so you will spend a total of €60 on buying and sending cards out of the Republic. If the cost of 50 cards in Northern Ireland is also a tenner, the cost of posting them is significantly less at 56p for a second class stamp which means the total cost of staying in touch the old-school way in the UK is £38 or €42.43, a quite ridiculous 41 per cent less.

So, what’s the difference when you add up all the numbers? All told this fictitious Christmas in the Republic would have set us back €1,275.08 while in the North the same Christmas costs just €1036.24. That means that people in Northern Ireland can celebrate in the weeks ahead for 23 per cent less than their cousins in the Republic. Unless, of course, the cousins do some cross-Border shopping. And with savings of that scale you’d hardly blame them.