Feeling the pinch? Conor Pope explains why you have no money

When costs of mortgage, food, utilities, motoring, education and health insurance are added up, a family of four faces significant expenditure, according to new figures 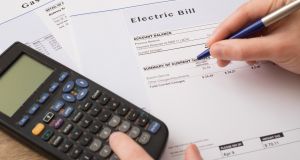 Home-heating costs have seen the biggest jump, according to the AA’s cost-of-living survey.

When the cost of most everything from food, mortgage payments, utility bills, motoring, phones, a modest social life, insurance, school and childcare and all the rest are added up, a typical family who bought even a small home during the boom years could easily spend more than €50,000 over the next 12 months.

While most families have little choice but to live on a lot less than that, the figure is not outlandish, according to independent figures compiled by this newspaper, coupled with the sixth annual cost-of-living survey published this morning by AA Home Insurance.

The annual cost of owning and maintaining a family home has risen by more than 3 per cent in the past 12 months and now stands at €16,169.15, according to the AA figures . And that figure does not include food, entertainment, education, clothes or any of the other things people need to stay alive.

Every year, the AA looks at the total cost of owning and running a home in Ireland. Mortgage and property tax are calculated based on the current average property price while all other expenses – from broadband to heating, to the cost of domestic appliances – is researched and worked out according to prices of the previous month.

Looking at the figures going back several years suggests Irish consumers have been on a real rollercoaster of costs over the past decade.

This year, the average house price is €228,000 and the AA yearly figure is €16,169, with the increase in the cost of running a home due to a rise in the national average price of a second-hand home in Ireland.

“The big story for 2017 has been rising house prices and increased difficulty for those trying to get on the property ladder this year,” says the the AA’s director of consumer affairs Conor Faughnan, after giving Pricewatch first sight of the research.

“However, for those fortunate enough to already own a home, 2017 hasn’t seen any major increases across the range of bills an average homeowner will face,” he adds.

“For new buyers, the concern is that house prices are going up, especially in Dublin. However, one thing this piece of research does demonstrate is the effectiveness of shopping around. Across all the bills we factor into this study, you’ll see considerable variations between competitors. Spend a little time on the research and it can certainly save you money.”

While the AA bases its calculations on those of a new buyer, there is also the ‘negative equity generation’ – homeowners who bought their house at the peak of the boom. The AA gives figures for that group too, assuming the house was bought in 2007. That group currently pays €5,172.74 more on their mortgage repayments than their counterparts who purchased their homes in the second quarter of this year.

Maintenance, repair and contingency funds is the second single most expensive bill for Irish householders and has increased marginally by 0.5 per cent. The AA estimates the average homeowner is likely to spend or set aside €1,246.83 each year to keep up with wear and tear. This figure equates to almost 8 per cent of the overall estimated cost of owning and running a home.

Taking annual average usage figures for a three- or four-bedroom detached house, the AA estimates the average homeowner will spend €707.75 (up 2.3 per cent) heating their home this year and a further €857.81, (up 9.88 per cent) on electricity.

“Across all the factors that the AA measured, home-heating costs saw the largest jump, an unfortunate piece of news for homeowners as we move into the winter season,” Faughnan adds. “However, when you weigh up every cost a homeowner faces, there has only been a relatively modest increase this year, but unfortunately this largely applied to the post-purchasing costs. Getting a foot in the front door remains a challenge for many as a result of continued increases in house prices.”

Among the variables that remained the same as or close to last year were television licence costs at €160 and property tax at €405.

Other costs included in the AA Home Insurance study were: building and contents insurance, which is calculated at about €547.81; telephone and broadband bills which it said were averaged at €468.66; household appliances at €573.82; household cleaning products at €281.85; and domestic refuse collection, which costs an average of €304.51.

The AA figures – while comprehensive – only look at the costs of keeping a roof over your head and don’t factor in fairly important elements such as food, transport and all the other things that most people would struggle to live without.

To work out how much a typical family of two adults and two children will need to spend over the next 12 months, we used the standard financial statement that banks ask customers to fill in if they are trying to restructure debts. Among the costs covered are health insurance, transport expenses, food, clothes and grooming, entertainment, childcare, education and mobile phones. So, how are those costs bearing up this year?

The cost of comprehensive insurance for two adults depends on many factors – notably location, driving history, no-claims bonus and type of car – and although prices have fallen back slightly compared with last year’s highs, our notional family can expect to have little change out of €1,200 this year.

The average age of a car in Ireland is about seven years, so annual motor tax based on engine-size for a 1.6-litre mid-sized car will be €478, while at least €400 will have to be put aside to cover servicing and maintenance. If you spend €10,000 on a car, keep it for five years and then sell it for half the price you paid for it, the annual cost is €1,000, which takes the total running costs to €4,545.

If the average Irish household spends €170 a week on food, the total bill will come in at just under €9,000 and that doesn’t factor in a Christmas blow-out of any kind.

According to Insolvency Service of Ireland expenditure guidelines, an adult is allowed €34 a week to cover the cost of “social inclusion”. If we allow just a fiver more per adult than that and an extra €10 to cover each child each week, the annual spend on social inclusion for a family of four will come to €4,567.

According to Barnardos, when the cost of clothes, shoes, books, stationery, classroom resources and the voluntary contribution were totted up, the cost of sending a child into senior infants is put at €355, up from €340 last year. The cost for a child in fourth class is €395, while the cost of sending a child into secondary school is €800. If we allow a further €500 to cover costs for trips and extra-curricular activities and assume our notional household has one child in fourth class and one in first year, then the annual cost of a free education climbs to €1,655.

Schools in Ireland are obliged to open for 183 days a year, so if both parents are working, then after-school childcare costs will have to be added to the bill. Our notional family have found themselves a childminder who charges €170 a week for the school year of 36 weeks, which is a total each year of €6,120. Combining that and the education costs, the total spend rises to €7,775.

We won’t even mention the cost of a school tour which – according to a story by Carl O’Brien in this newspaper last week – can be almost €2,000.

Assuming the man in our notional household visits the barber eight times a year and his partner visits the salon once every 10 weeks (plus once for a special occasion), the total cost of haircare alone will reach €800. If the family then spends just €50 a month on clothes, the amount needed rises to €1,400.

When you put it all together, that means the average person who bought a home at the average price in 2017 could easily spend a total of €45,065 over the next 12 months. Those who bought a property at the height of the boom might find themselves spending €50,237. And that is without taking any holidays or factoring in Christmas, birthdays or anything that could be classified as a significant treat over the course of a year.

Given that there aren’t very many households where the combined pre-tax income tops €100,000, is it any wonder so many people are still feeling the pinch?